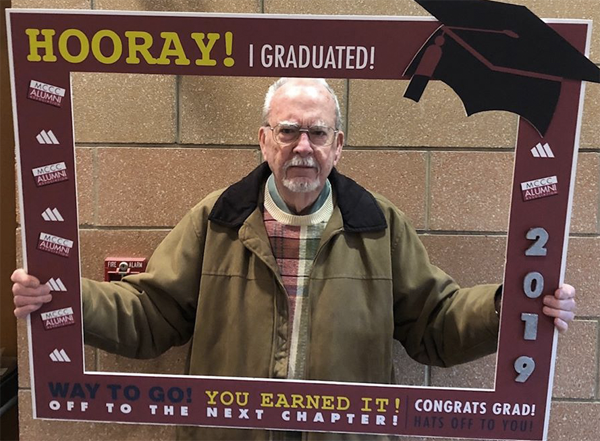 Dr. Ronald Campbell, who worked for HFC from 1955-65 and was the founding president of Monroe County Community College (MCCC), recently celebrated his 95th birthday and shows no signs of slowing down, dedicating his life to the community he has served for so long.

“It’s been a very rewarding experience. The community has always been supportive of MCCC, and it was a great place to work. The people associated with (MCCC) are terrific. I couldn’t have asked for a better set of circumstances,” said Campbell, MCCC President Emeritus, of Monroe.

A WWII veteran with Dearborn roots

A 1943 alumnus of Fordson High School in Dearborn, Campbell served in the U.S. Army during World War II from 1943-46, rising to the rank of sergeant. He attended Bowling Green State University in Ohio on the G.I. Bill, earning his bachelor’s degree in physical education and history in 1950. He served in the Army active reserves during the Korean War from 1950-56, rising to the rank of first lieutenant. In 1953, he earned his master’s degree in history and educational administration from what is now the University of Detroit Mercy. In 1964, he earned his doctorate in higher education from Wayne State University.

“I always had good teachers, and I thought this would be something I’d like to do,” said Campbell.

Initially, he called himself a “circuit-rider,” teaching physical education at several schools within the district before settling at Bryant Junior High School (now Bryant Middle School), where he remained until 1955. At Bryant, he met Blondelle “Delle” Campbell, a fellow teacher. The two married on Dec. 23, 1950. They were married for 66 years until she passed away in late 2016. Their son, Kevin, lives in Illinois. He and his wife have three children.

“I never started out to be an administrator,” recalled Campbell. “When I went to the College to teach, they needed someone to work on adult education, and I was assigned to that. I found out that if you’re willing to be flexible, a lot of good things can happen. I was a jack of all trades at the College.”

Campbell succeeded Ammerman as Dean of Instruction at HFC, serving from 1960-65. Among his students at the College were HFC President Emeritus Dr. Andrew A. Mazzara and his sister Marie. Mazzara spoke highly of Campbell.

“We have fond memories of him as a dedicated community college educator and student advocate,” recalled Mazzara. “Dr. Campbell went to bat for me when I completed my associate degree and transferred to Wayne State. Wayne State would not grant transfer credit for an educational psychology course. I went to Dr. Campbell’s office and told him about it. He immediately contacted Wayne State and worked out an agreement so I and other HFC education majors received transfer credit for that course.”

The founding of MCCC

On June 29, 1964, Monroe County voted to establish a new community college, elect a six-member board of trustees, and support an annual maximum tax rate of 1.25 mills. When the board met for the first time one week later, MCCC was still in the concept stage. The board scrambled to find a location for the campus, create a curriculum, hire staff, apply for government funding, formulate a budget, levy taxes, and hire a president.

Enter Campbell. He was one of 17 applicants for the presidency.

“I wanted to do something more,” said Campbell. “(Ammerman and Eshleman) had been very instrumental in giving me a lot of opportunities. They encouraged me to apply, so I did. I was really fortunate to have these men as my mentors. I learned a lot from them.”

Campbell became MCCC's first president in early 1965 at the age of 39. It was exciting and scary at the same time to start a new educational institution from the ground up. There was no campus. Campbell’s first office address was 2 E. First St. above Weisel’s Drug Store, near the railroad.

The early days of Campbell's presidency had some unique challenges, which he recalls with humor. On his first day, he was in a car accident and arrived two hours late. When his office furniture arrived later on that week, the driver learned there was no elevator, so he left everything on the sidewalk and drove away. Campbell and other staff members carried the furniture up the stairs themselves.

“The maintenance crew and the support staff were exceptional. Bob Kollin came with me from HFC, and he became the first dean of instruction,” said Campbell. “I couldn’t have asked for a better board – they were just fantastic, starting from scratch. They set realistic goals, which made it easy to work with faculty and students. They made my job easier, though it was still pretty hard.”

MCCC was originally projected to open to students in 1967. But the board wanted it open sooner. Campbell told them if his team was able to find suitable quarters, they would do their best to open within a year.

“I knew it would double the workload, but everyone pitched in,” said Campbell.

MCCC opened to students in September 1965. Since the groundbreaking wasn’t scheduled until June 1966, MCCC leased classrooms at Ida High School, which served as its headquarters for MCCC’s first year. Classes ran from 4:00 p.m. to 10:00 p.m. Monday through Thursday at the high school. The first class had 469 students.

“We had no property,” said Campbell. “You can't construct buildings overnight. I didn’t want to start something that would be a mess before it got off the ground. So Ida High School was our savior for a while.”

Developing an educational institution with integrity

At the official groundbreaking ceremony – on what would be MCCC’s main campus at 1555 Raisinville Rd. – Campbell’s son, Kevin, who was 8 at the time, helped his father dig the first ceremonial shovels of dirt. After the groundbreaking, there was a carpenters' strike in the state, delaying work on the nascent campus.

“There were a variety of experiences and people to work with – architects, the community, board members, students,” said Campbell. “I had the best board in the world. We also hired a lot of young blood at the start. It was a thrilling time.”

“Once the buildings were in place, the next step was developing (MCCC) into an educational institution that would have integrity,” explained Campbell. “Ordinarily it would take 15 years before we were accepted and recognized, but we made it sooner than that. It took less than 10 years – I was proud of that.”

Campbell retired in 1985. He was succeeded by Gerald Welch, another HFC graduate and a recipient of the HFC Distinguished Alumni Award.

“I had done a lot in my 20 years at the helm of MCCC. I thought it would be a good time to go,” he said. “Everyone kidded me, saying I was too young to retire,” he added with a laugh.

Campbell remained active within the community and with MCCC after stepping down from the presidency. He has been a member of the Monroe Exchange Club since 1965 and is one of the longest-serving members in its history. He has served on the MCCC Foundation Board of Trustees since 1999, making him one of the longest-sitting members in its history. The Monroe County Commissioners and the Michigan Legislature proclaimed Dec. 7, 1985 as Dr. Ronald Campbell Day.

Other community involvement and honors include:
• President of the Monroe YMCA (1969-71)
• President of the Greater Monroe Chamber of Commerce (1970)
• United Fund of Monroe Board of Directors (1967-69)
• Mercy-Memorial Hospital Board of Trustees (1978-83)
• Who’s Who in the Midwest (1970)
• Campus Community Events Committee (1985-95)
• MCCC’s Campbell Learning Resource Center, which houses the library and classrooms, is named after Campbell (1988)

In 2000, Campbell and his late sister, Rebecca Campbell Sandretto, established a scholarship in honor of their parents, the Elizabeth and Samuel Campbell Memorial Scholarship. In 2018, a new fund, the President Emeritus Dr. Ronald Campbell and Blondelle Campbell Endowed Scholarship, was established.

“It’s fulfilling to look back at the things that have transpired and the people who passed through the college from different walks of life. They’ve become doctors, teachers, lawyers, farmers, engineers, technicians. I’ve seen judges serving more than 25 years on the bench who went to MCCC. It’s been a very rewarding career,” said Campbell.

“MCCC is in good hands,” said Campbell. “All the presidents have had different talents and different problems. (MCCC) has been served well by its presidents and its board members.”

“(Welch) and I attended (HFC) as students at about the same time,” said Mazzara. “So MCCC is, in many ways, a sister college of HFC, sharing some of the key administrators during its early development. These were great people whose focus was always on students. As a result, they created a great community college.”

“(Campbell) touched the lives of my sister and me, as well as many other students,” said Mazzara. “As the years passed, I continued to have wonderful experiences with Ron Campbell as a community college consultant for the Michigan Department of Education and as a young dean of technical education at the College. He was very generous with sharing his professional experiences with myself and others – a true gentleman and scholar!”