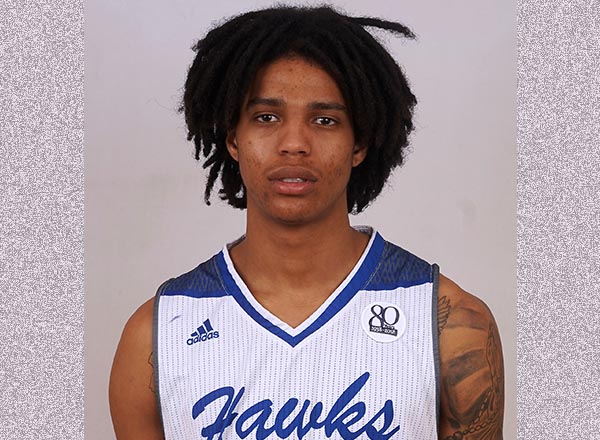 “I didn’t think that would happen, to be honest. It’s surprising to me, jumping back in the game and getting all these compliments,” said McCaskill, of Detroit, who is working on his associate degree in general studies at HFC. “I came in the second semester of this season. I was out of shape.”

Other honors he has received in his athletic career include:

The eldest of two, McCaskill – who stands 6 ft 8, making him the tallest player on the team – attended Renaissance High School in Detroit and graduated from the SPIRE Institute in Geneva, OH in 2019. Upon graduation, he red-shirted at Florida Atlantic University in Boca Raton, FL for his first year of college.

A team player getting back into shape

“Coach Shep’s my guy. He’s a good coach, who makes sure I’m staying straight,” said McCaskill. “He pushes me hard and got me back in shape. He kept pushing me to do better and go to the next level. Not just him, but all the other assistant coaches too. All the coaches on the staff are good coaches.”

At the moment, McCaskill plans to play basketball at HFC for another year. He would like to continue playing ball after graduating but is unsure where he’ll transfer. For now, he’s looking forward to next season.

“Carrington is as talented a player as I have ever been around,” said Shepard. “What truly makes him special is he is a totally unselfish superstar. There aren’t many student athletes like him. We are really fortunate to have him another year.”