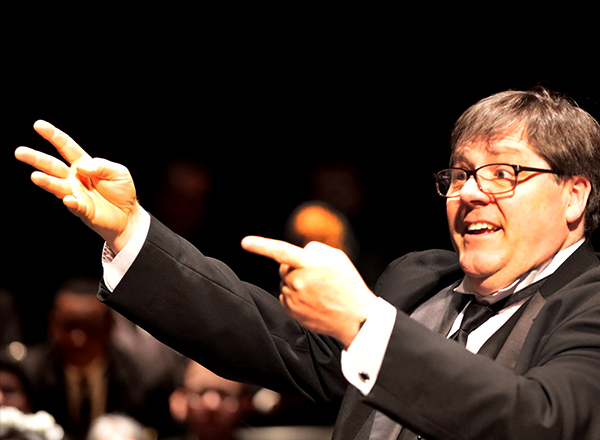 Since 1995, Kevin Dewey has been making beautiful music for HFC in one way or another.

“I love it here! I get to wear a lot of hats. I love working with adult musicians from entry level right up through the professional level,” said Dewey, the HFC Director of Choral and Vocal Music, who lives in Dearborn with his wife and three children.

Dewey’s duties include teaching the majority of the music major classes, such as aural music skills, music fundamentals, music theory; he has also taught music history, music literature, and music appreciation. He advises all music students and has written course masters for more than 50 music courses at the College. He has also served on the HFC Faculty Senate.

During the pandemic, Dewey created a way to teach music online, including having students submit musical selections to him online, and perhaps his most notable pandemic-related accomplishment: creating the "virtual choir." The virtual choir allows musicians to sing and perform in remote venues, then pulls it all together into beautiful harmony. This is no easy feat, as it requires both technical and artistic ability, and a lot of patience in the production. You can see and hear at least a dozen performances of the Virtual Choir on the HFC Music YouTube channel.

During his time at the College, Dewey has built the HFC Choral program from two ensembles to as many as seven, increasing the number of vocal musicians to 150. An accomplished musician himself, he is the director of the following musical groups at HFC:

Dewey is the founder of Blue Fusion, Midnight Blue, Renaissance Voices, and Vanguard Voices. In addition to directing all of the HFC choral and vocal jazz groups, Dewey has served as the music director for the HFC Theatre Department productions of Sweeney Todd: The Demon Barber of Fleet Street, Pippin, The Music Man, The Wiz, Oliver, The Who’s Tommy, Grease, and Hairspray.

Under Dewey’s leadership, HFC musicians have performed at three Presidential Inaugurations, as well as overseas.

His proudest accomplishment at HFC is founding the President’s Collage Concert with the Henry Ford Big Band founder Rick Goward.

“It’s been 26 straight years so far, including the 2021 President’s Virtual College Concert,” said Dewey. “The President’s Collage Concert is always a lot of fun. I’ve conducted it for four HFC presidents.”

He wrote four choral compositions and two jazz arrangements that were introduced in the 2003 concert.

“They, along with many other materials, were created while I was on a one-semester sabbatical in Stratford, Ontario,” said Dewey. “I composed them on the white grand piano at The Queen's Inn. I composed and arranged pieces for the six groups I was directing at HFC, which was Henry Ford Community College at the time.”

Born in Sacramento, CA, Dewey grew up in Dearborn in a very creative, musical household. His mother was a concert pianist and his father was a trumpeter in the University of Michigan Marching Band in Ann Arbor.

“I grew up listening to everything from Chopin, Brahms, and Beethoven on my mother’s grand piano in our living room to Stan Kenton and Maynard Ferguson in concert halls,” he said. “It was also a tradition for my dad to play U-M Marching Band records on game days full blast on the ‘Sweet 16’ speaker system, which he designed and built himself!”

Dewey graduated from Dearborn High School in 1979. He is a two-time alumnus of Wayne State University, where he earned his bachelor’s degree in jazz studies in 1985 and his master’s degree in choral conducting in 1988. The late Dr. Harry M. Langsford – the founder of Wayne State’s Men’s Glee Club and its sole director for nearly 50 years – served as Dewey’s graduate advisor.

In 1998, Dewey arranged musical selections that were performed on what is now CBS 62 at the Montreux-Detroit Jazz Festival. That same year, the Big Band and Midnight Blue performed Dewey’s arrangements at the Montreux Jazz festival in Switzerland.

Performing for the Detroit Symphony Orchestra a career highlight

In 2011, Dewey was the guest conductor at the Detroit Symphony Orchestra for their special performance, “An Evening of Rodgers & Hammerstein Classics.” He considers this performance one of the highlights of his career.

“That was a super special event!” he recalled fondly. “It was when the musicians were on strike. They were still doing occasional concerts, billed as ‘The Musicians of the Detroit Symphony,’ in order to raise funds for those who were out of work because of the strike. They contacted the Detroit Federation of Musicians’s then-president Gordon Stump, who knew me well; he recommended that they book me to conduct that special concert. Again, when you’re a professional musician and you hang out with professional musicians…”

In 2005, Dewey and Renaissance Voices performed a concert in the great hall of Kronborg Slott in Denmark. It has been immortalized as Elsinore Castle in William Shakespeare’s The Tragedy of Hamlet, Prince of Denmark. According to Dewey, Renaissance Voices was the only choir to ever perform in this beautiful, historic, and acoustically excellent venue.

“It was a thrilling and magical experience, and the audience loved it,” said Dewey. “We even released a CD recording of the performance after the tour!”

Dewey chose to teach at the college level because he wanted to work with a high caliber of musician. Before coming to HFC, Dewey worked as an adjunct music professor at Wayne State, Macomb Community College, and Oakland Community College.

“HFC has excellent music-making and music-recording facilities and equipment,” he said. “It has a supportive staff who enjoy hearing the student groups perform. The students are great. The staff is great. I’m immersed in beautiful music all day. I enjoy seeing students go on to either fine careers in music or just performing, consuming, and loving music.”