“Education is the great equalizer,” and Rachael Lobdell lives her dream to attend U-M 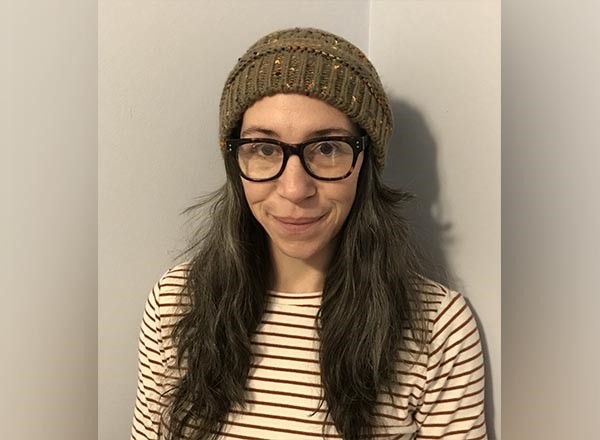 When she was in high school, attending the University of Michigan was nothing but a distant dream for HFC student Rachael Lobdell.

Lobdell – the youngest of three – had to help bring in income to support herself and her family, which prompted her to make the hard decision to drop out of South Lyon High School when she turned 16. Dropping out of high school always bothered Lobdell. It made getting a high school diploma seem out of reach, to stay nothing of getting a college education.

Well into her 30s, Lobdell – who worked in retail and the restaurant industry for years – enrolled at HFC. The College turned her life around. Not only will she graduate this spring, earning her associate degree in applied science and certification as a surgical technologist, but she will attend U-M Ann Arbor this fall.

The distant dream she once had is now becoming a reality after all these years.

“I never imagined I would go to U-M. When I was a teenager, that was only a dream, an unrealistic goal. Now I’m like, ‘Wow! This is really happening!’” said Lobdell, who earned her GED when she was 27.

HFC sociology instructor Brian Smith was thrilled to hear that Lobdell was accepted at U-M. In fact, he wrote a letter of recommendation on her behalf.

"Rachael was key to one of the most enjoyable and memorable classes I've taught," he said. "It was a group of students who were very enthusiastic about exploring the social issues covered by sociology. Rachael brought much insight and maturity to class conversations, often with her great sense of humor."

Lobdell is attending U-M on the Go Blue Guarantee, a program that offers free tuition for families with incomes of $65,000 and under. Lobdell – along with fiancé Jason Worden and their 4-year-old daughter Hazel – live with her parents in Dearborn. Her parents knew Lobdell and Worden were unhappy in their jobs, so they invited them to move in with them so they could pursue higher education full-time.

Making the change was a leap of faith, but “I want to set an example for my daughter. I want to show her that education is the great equalizer. It opens up doors you never thought possible,” said Lobdell.

At U-M, Lobdell will pursue a bachelor’s degree in biology with a minor in sociology. She aspires to a career as a physician assistant (PA).

“I was not a bad student in high school. In fact, I was a good a student. Before I dropped out, medical school was on my radar,” explained Lobdell. “Being a PA is a good fit for me. PAs have a lot of freedom; I can switch specialties without going back to school and can still give hands-on patient care. It also offers a work-life balance, so I can be there for my daughter.”

HFC made it possible

Lobdell repeatedly directs the credit of her success to HFC. She came to HFC because of the “phenomenal reputation” of the College’s Surgical Technologist program. Her mentor is former program director Keambra Pierson, who is now the associate dean of the HFC School of Business, Entrepreneurship, and Professional Development (BEPD). Lobdell served as a biology tutor for a semester. Currently, she is in the process of completing her second round of clinicals at Beaumont Hospital, Royal Oak.

“I couldn’t have done this without HFC – the counselors, the advisors, the teachers, even President Russ Kavalhuna have been amazing,” said Lobdell. “I want to send a big ‘thank you’ to everyone who kept me going. It’s been a long road. No words can express the gratitude I feel toward the faculty and staff of HFC,” she said.

Lobdell has a message for non-traditional students: “It’s never too late”

At this point, Lobdell swallowed the lump in her throat and her eyes got misty. A few stray tears escaped, but they were happy tears. She pointed out that not only did she grow as a student at HFC, but also as a person.

“I’ve made a lot of good, solid friendships here. I’ve never been that good at developing relationships and friendships, but that changed when I came to HFC. It allowed me to open up and start living my life. I became my true self here,” she said.

Lobdell has a message for non-traditional students, especially those who believe the odds are against them.

“It’s never too late. Don’t give up. We can all do this,” she said. “There is so much help available on campus. Don’t be afraid to ask questions. Someone will find you the answer. Don’t be afraid to go on to a bigger university after getting your associate degree. I’ll forever be in debt to Henry Ford College.”