Candela earns All-Conference honors, reflects on playing during a pandemic 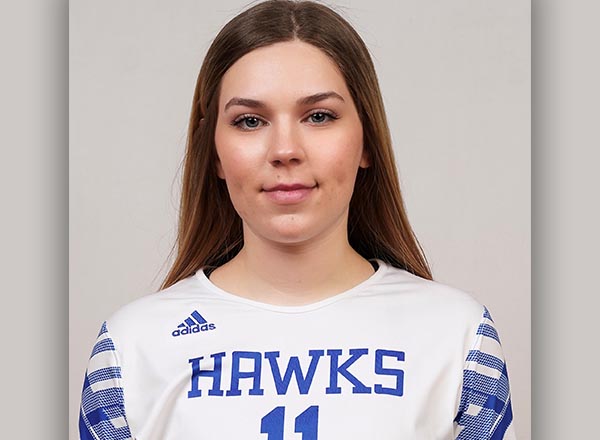 Volleyball player Madison Candela, a freshman at HFC, earned Second Team All-Conference honors for her hard work on the court this season.

“This is huge for me! It validates the countless hours of hard work I've put in at the gym, the weight room, volleyball camps, and just hours spent with my club team helping others learn the game. It validates my parents’ choice to encourage me and push me to keep going, because I was cut from the volleyball team in 7th grade and 8th grade. It really shows all the love, encouragement, effort, and patience they’ve poured into me along the way,” said Candela, of Dearborn.

A 2020 graduate of Hartland High School and the youngest of two, Candela is attending HFC on an athletic scholarship. She is studying business administration. Another incentive for attending HFC is that her father, Vincent, and her uncle, Frank, both attended HFC (when it was Henry Ford Community College) and spoke fondly of their experiences.

Forging strong bonds with her teammates

“I was offered a starting spot on the court, and knew I couldn’t pass up an opportunity like this,” said Candela. “Coming into a new environment, I wasn’t expecting the opportunity to be a leader on the court, as there are a lot of sophomores. But they welcomed me and showed me the way – they lifted me up, supported me, and pumped me up all season long. Playing on a team with teammates who are genuinely happy to see you succeed is all I could have asked for. I found that at HFC.”

As a senior at Hartland, Candela earned the All-Conference Award, the Offensive Player Award, and Second Team Honorable Mention.

“I definitely didn’t expect to carry these awards into my freshman year of college. I felt like just another player next to all of the amazing players in our conference, so I really am honored to receive this award coming off my first college season. I hope next season is even better! I can definitely say that this season was one for the books!” said Candela.

The team becomes a family

According to Candela, making the transition from high school athletics to the collegiate level was easy, due to the efforts of HFC Athletic Director Rochelle Taylor and new head coach Shannon Braun.

“Ms. Taylor takes really good care of us and worked really hard for her athletes to be able to have such a great season, despite playing during a pandemic,” said Candela. “Bringing in a new head coach was beneficial for the program as well. Coach Braun knows so much about the game and knows how to cater to our coaching needs. I believe we have a strong volleyball program here, and my teammates have been a huge part of my life since August. I’ve grown so close with my volleyball family here at HFC, and we all have a bond that transcends coaching.”

Candela hopes to transfer a four-year college and university, although she’s not sure which at this point. For now, she wants to take advantage of playing an extra year for the Hawks. Due to the pandemic, the National Junior College Athletic Association (NJCAA) has given all athletes participating in winter sports an extra year of eligibility. In her case, she has two more years of eligibility.

Gutting out the pandemic together as a team

Candela spoke about the difficulties about playing volleyball in this pandemic. Not only did they have to move their season from fall to winter, it was condensed into one and a half months (a regular season is approximately three months long). They went from practicing five days per week for three hours to playing 3-4 matches per week, some back-to-back with few breaks.

“My body is definitely the most beaten down it’s ever been. Playing back-to-back had me going home limping and sore everyday,” she said, laughing. “It’s a feeling I'm starting to miss, though, as our season has come to an end. Throughout it all, I grew stronger as a person and as a player because every time I stepped into the gym, my mental and physical strength were pushed to limits I didn’t know I could reach.”

Candela continued: “I’m glad my teammates realized they were strong enough for this challenge as well. II’m proud of all the athletes competing right now because we're all going through the same thing, and we’re still prioritizing our teammates first. We’ve been shown so much support this season from our families, friends, and fellow student athletes at HFC, as well as from our awesome commentators and staff working the games. This will never go unnoticed or unappreciated. My family, teammates, coaches, and friends definitely got me through this season, and I am forever grateful.”