Notice: This article is more than one year old and is part of the Henry Ford College news archive. Information in the article may be outdated. For the most current news and information about Henry Ford College, please visit hfcc.edu/news, or contact communications@hfcc.edu.
Release Date:
Thursday, May 21, 2020 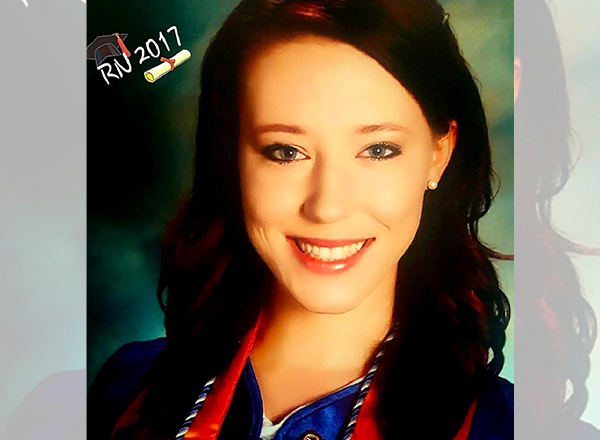 HFC alumna Amber Marie Heery works as a traveling nurse in South Dakota. In 2019, she was the first nurse from Michigan to move to North Dakota.

In 2019, HFC alumna Amber Marie Heery was the first nurse from Michigan to move to North Dakota.

“I knew this because I had to communicate with the Michigan Board of Nursing and the North Dakota Board of Nursing,” said Heery, who earned her associate degree in nursing from HFC in 2017 and lives in Rapid City, SD.

An alumna of John Glenn High School in Westland, Heery had a great job opportunity 15 minutes from her home in Michigan at one of the state’s largest healthcare systems. Before accepting that generous offer, Heery – who wanted to become a traveling nurse – had what she called a nagging feeling to reach out to Aureus Medical Group, a traveling nurse agency in Omaha, NE.

She learned that Sanford Medical Center in Fargo, ND had recently opened, and needed nurses. The medical facility was a level 1 trauma center. Heery accepted her first job offer and had to scramble to move to Fargo.

“I was in shock. I was sitting at the kitchen table with my family around me. When I told them I had accepted a traveling nurse job in North Dakota, they just stared. There was nobody in Fargo I knew. I packed up my Ford Fiesta and moved into my first apartment by myself. I left my home state withim two weeks of taking the job,” said Heery. “It was life-changing. It was insane. There was so much that went into it, so much that happened so fast, but it worked out. I wouldn’t take it back for the world. It was crazy, but it was also great.”

A registered nurse, Heery credits her education at HFC for providing a firm foothold in the nursing profession.

“The nursing program was very challenging,” she said. “I went through the second semester of the new concept-based curriculum. We were all trying to adjust to the learning styles they were trying to teach us. It was different from the regular classroom education I was used to, so I really had to learn how to learn in a new way, which took some time. I really enjoyed my classmates; we helped each other through it. The instructors were fabulous – they were very experienced, educated, informative, caring people, so that really helped.”

“Amber was a great student and a phenomenal leader. She was a positive role model who practiced with integrity and passion. She was a member of the Student Nursing Association (SNA) and always had a smile on her face as she helped others in our community. I am super proud of her and her many accomplishments since she graduated from HFC. I continue to wish her every happiness and success in her professional and personal life,” said HFC nursing professor and SNA advisor Cathy Gangarossa.

A revolutionary time for nurses

Heery will soon begin work at a medical facility for three months with the choice of either remaining there for another three months or moving to a different facility. Currently, she works for Monument Health Hospital in Rapid City, SD.

Heery reflected on being a nurse during the current COVID-19 pandemic.

“I work on the western side of South Dakota, which is one of the few states that wasn’t locked down. I got lucky, I guess. We haven’t gotten a high influx of patients who tested positive for COVID-19, although we are obeying all the safety protocols. We would become the main hub if things escalated. Right now, it’s been pretty manageable, but it’s still just as frightening.”

It’s been several months since Heery has seen her family in person, which is also a challenge on top of this pandemic. She never imagined beginning her career in the midst of a pandemic.

“This is a revolutionary time for me and for nurses,” said Heery. “It’s really a perspective shift. To be in it at the start, it will really shape the rest of my nursing career. It’s a make-or-break time. I'm going to push through and be stronger for it.”