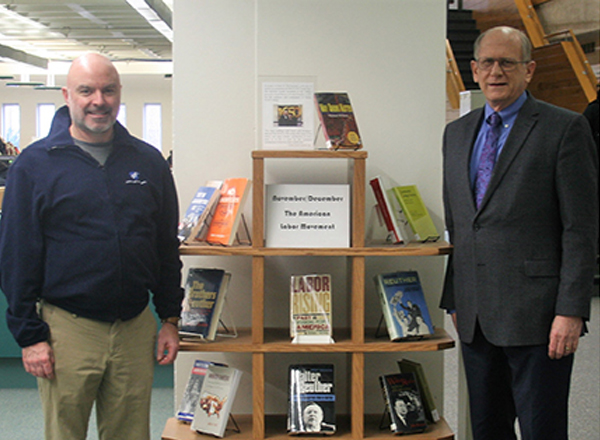 John McDonald (right) was recently reelected to his 22nd term as the president of the HFC Federation of Teachers, Local 1650. He's pictured here with HFC political science professor Dr. Eric Rader, the external vice president of 1650.

John McDonald was recently reelected to his 22nd consecutive term and 42nd consecutive year as president of the HFC Federation of Teachers, Local 1650 for a two-year term, beginning in January 2021. That month also marks his 52nd year at Henry Ford College.

“It has been and is an honor to carry on the legacy of my HFC teachers and mentors. I came to a great College. I have fought hard to leave a great College to my colleagues and successors,” said McDonald.

McDonald was also reelected to a two-year term as the American Federation of Teachers (AFT) National Vice President, a position he’s held since 2012. AFT is the second largest teachers’ labor union in the United States, representing 1.7 million K-12 and higher education faculty and support staff, nurses, and government employees.

In addition, McDonald has served as the AFT-Michigan Vice President for Higher Education since 1978 and the AFT Higher Education Program & Policy Council (PPC) since 1991. Next year will mark his 30th anniversary on the PPC.

“With local, state, and national responsibilities, the work can be very demanding. I do not ‘juggle’ the work of these positions – I get it done. Often, I work well into the early hours of the morning and definitely on weekends. This is true of all union activists,” said McDonald.

McDonald spoke about his goals for his 22nd term leading Local 1650. He wants to ensure the health and safety of HFC employees during the pandemic, and work with the College regarding ongoing union concerns.

Under McDonald’s leadership, Local 1650 has negotiated one of the strongest community college contracts in the U.S. with respect to shared governance, community service, wages, post tenure review, distance education, intellectual property, and professional development. McDonald has fostered within Local 1650 a strong tradition of political activism and community engagement. He has co-chaired the advocacy campaigns for nearly 20 operational and capital improvement ballot proposals. He also played a major role in the formation of the Adjunct Faculty Organization (AFO), AFT Local 337, at HFC, whose president, Lynn Boza, was recently reelected to a second term.

“John McDonald has dedicated his career to protecting the professional standing of HFC faculty, so we can focus on helping our students succeed. He has a passion for the mission of HFC as a gateway to better lives for the people of Dearborn and our community. John has mentored hundreds of faculty over his years as Local 1650 president, encouraging us to become leaders in our own right. His long experience here has been critical to our success as a College, and I’m grateful every day for his leadership and friendship,” said HFC political science professor Dr. Eric Rader, the External Vice President of Local 1650.

Serving the community and country by teaching at HFC

An alumnus of Detroit Catholic Central High School, McDonald attended HFC (then Henry Ford Community College) from 1964-66. He transferred to the University of Michigan, where he earned both his bachelor’s and master’s degrees in English. He began teaching at HFC in 1969, focusing on 19th century American literature and English composition.

“When I was hired, I did not think I would spend my entire career here,” said McDonald. “I soon realized that a career spent teaching working class, first-generation, and immigrant community college students was a great way to serve our community and our country, and give students the opportunity to achieve, as HFC and its faculty had done for me.”

The roots of activism

McDonald’s involvement in Local 1650 began shortly after he earned tenure in 1971. Declining enrollment throughout the Dearborn Public Schools resulted in layoffs at the P-12 level. The superintendent, who oversaw both P-12 and the College at that time, mandated layoffs that McDonald believed were unnecessary.

McDonald was among nine HFC instructors who were laid off. On behalf of his colleagues, McDonald hired Donald Calkins, a Wayne State University law professor. Calkins filed a lawsuit against the school district and the College. McDonald's and his colleagues’ employment at HFC was restored.

“I very much appreciate the opportunity to represent generations of outstanding but possibly under-appreciated faculty at HFC. I was mentored by World War II and Korean War veterans, who demanded to be treated and compensated as professionals, and who had the courage to establish a union in a hostile environment. They risked their careers and family livelihoods in doing so. They taught me a great deal about devotion to duty, the need to speak truth to power, and the need to do more than simply speak if the truth will not be heard.”

“The reelection of John McDonald to an unprecedented 42nd year as Local 1650 President signals members’ confidence in his leadership,” said HFC Learning Lab lead faculty Chardin Claybourne, who also serves as the Internal Vice President of Local 1650. “His spirit of advocacy is incredible—not only on behalf of the Federation, but in fighting for the ideals of Henry Ford College."