Notice: This article is more than one year old and is part of the Henry Ford College news archive. Information in the article may be outdated. For the most current news and information about Henry Ford College, please visit hfcc.edu/news, or contact communications@hfcc.edu.
Release Date:
Thursday, December 13, 2018 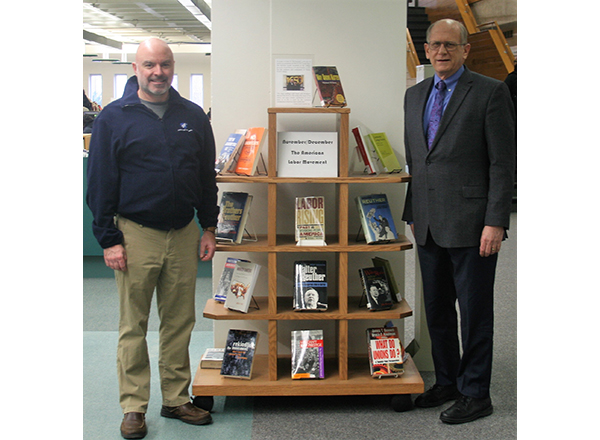 CAPTION: To celebrate John McDonald's 40th year as president of Local 1650, a collection in his honor called the Library of Labor Studies, chronicling the history of labor relations, has been established on the first floor of the Eshleman Library (Building B). McDonald (right) is pictured with the Labor Studies collection and colleague Dr. Eric Rader (left), an HFC professor of political science.

The HFC Federation of Teachers, Local 1650, wanted to celebrate John McDonald’s 40th year as president in a unique way.

“We considered many options for John, but then settled on the idea of creating a library collection in his name,” said Hill. “We thought this gesture would be the most fitting gift we could give, since John has dedicated his professional life to the faculty, students, and community of the College.”

Not only does 2018 mark McDonald’s 40th year as president of 1650, he will celebrate 50 years at HFC in 2019. McDonald received his undergraduate and graduate degrees in English from the University of Michigan in Ann Arbor. His teaching career at HFC began in 1969, focusing on English composition and 19th-century American literature.

“The constant over those years and the years that preceded my tenure has been an impressively qualified faculty and staff, highly committed to serving HFC’s students and community,” said McDonald. “I had the good fortune of being hired by and learning from the founding faculty of HFC as they were concluding their careers. I was mentored by World War II veterans and Korea veterans. These leaders had the courage to found a faculty union and establish professional compensation and professional standing, as codified in the Local 1650 contract and faculty constitution.”

Since 1978, McDonald has been the president of Local 1650. He has also served as the American Federation of Teachers-Michigan’s vice president for higher education since 1978, as well as a member of the AFT Higher Education Program and Policy Council since its inception in 1991. In 2012, he was the first elected vice president of the AFT at the national level, which represents 1.7 million members. In mid-2018, he was re-elected to the position.

“It is almost unheard of for a president of a relatively small local union to reach this level within the AFT,” said Rader, HFC political science professor. “It speaks to the great esteem and respect his national colleagues and AFT President Randi Weingarten have for his professional expertise. This College and its students benefit every day from having John as the president of Local 1650, and we all are better off for his dedicated and ongoing service.”

Among the nation's strongest contracts

Under McDonald’s leadership, 1650 has negotiated one of the strongest community college contracts in the United States with respect to shared governance, community service, wages, post tenure review, distance education, intellectual property, and professional development. McDonald has fostered within Local 1650 a strong tradition of political activism and community engagement.

McDonald also played a major role in the formation of the Adjunct Faculty Organization, AFT Local 337, at HFC.

As a member of the HFC English Department, McDonald has served on curriculum, accreditation self-study, strategic planning, and facilities planning committees throughout his career. He has co-chaired the advocacy campaigns for nearly 20 operational and capital improvement ballot proposals.

“John’s ideas, writing, and voice have helped our College develop into a community-centered institution that recognizes the value and dignity of its faculty, staff, and students,” said Hill. “This speaks to John’s sense of responsibility to our College. His skills in labor relations are undeniable, but it is his integrity as a member of our community that has made him a long-serving and effective campus leader.”

Motivation to take a leadership role in Local 1650

McDonald became involved in Local 1650 in 1971 shortly after he received tenure. Declining enrollment throughout the district resulted in layoffs at the P-12 level, and the superintendent – who oversaw both P-12 and the College at that time – mandated layoffs that McDonald believed were unnecessary. McDonald was among nine College instructors who were laid off. At the time, McDonald says, Local 1650 and the Michigan Federation of Teachers did not intervene.

On behalf of his colleagues, McDonald hired Donald Calkins, a Wayne State University law professor. Calkins filed a lawsuit against the Dearborn district and the College. In the end, McDonald's and his colleagues’ employment at HFC was restored. McDonald was not fully compensated for his lost earnings.

“I decided at that time that I wanted to work with Local 1650 so that no teacher would face that kind of injustice and trauma without strong union support,” said McDonald. “Labor unions provide employees the legal standing to bargain collectively on wages, hours, and conditions of employment. To an extent, they level the playing field between employees and management. They permit employees to express their views, critiques, and suggestions without fear of retaliation.”

He believes that, in many cases, “it is the faculty who preserve institutional history, who can best advise on what has been tried and whether a proposed initiative is likely to succeed.”

Rader lauded McDonald on the impact of his leadership.

“John has represented hundreds of faculty and has devoted countless hours to ensuring our fair treatment and ability to provide first-rate instruction to our students,” said Rader. “Beyond his leadership, John has been a key leader at the College on numerous millage campaigns and is a recognized, respected public figure in his own right in our community.”

The College congratulates John McDonald on his 50 years of College and community service, and 40 years of union leadership. Stop by the Eshleman Library to see the Library of Labor Studies collection, and to check out the collection's books. Faculty and staff, as well as students, have borrowing privileges at the library.