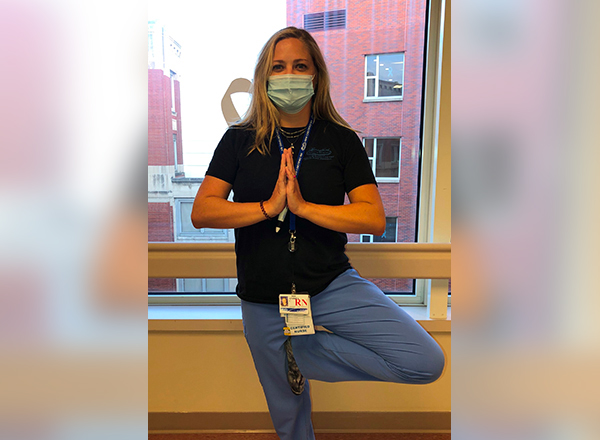 HFC alumna Andrea Corrie is a registered nurse at Henry Ford Health System. She recently earned her certification to teach yoga, which has helped her cope as she works the front lines during the coronavirus pandemic.

HFC alumna Andrea Corrie’s mother told her when she was a student at Oscar A. Carlson High School in Gibraltar that she should become a nurse.

“That was my path. I enrolled in pre-nursing at Western Michigan University. But it wasn’t the right time and the right fit,” said Corrie, a Dearborn native who lives in Brownstown with her husband, Paul.

So she changed her major and earned her bachelor’s degree in textile and apparel with a focus on merchandising from WMU. She later went on to earn a certificate in esthiology from the Douglas J. Aveda Institute in Royal Oak.

While working as an esthetician, Corrie learned about the HFC Nursing Program from a co-worker. She had taken a class at HFC one summer as a guest student while attending WMU, and had a good impression of the College. After 10 years as an esthetician, she decided it was the right time to go into nursing, and enrolled at HFC.

“It was through word of mouth, really,” said Corrie. “The reputation of the College’s nursing program is strong.”

Corrie earned her associate degree in nursing, graduating with honors in 2016. She was president of the HFC chapter of the Michigan Nursing Students Association (MNSA) and membership director of the HFC chapter of the Student Nurses Association (SNA). She organized a volunteer medical trip to Belize, where she and her classmates provided medical assistance to local residents in locations where it was hard to receive adequate care.

Needless to say, her mother is thrilled she finally went into nursing.

“I should’ve listened to my mom from the get-go,” said Corrie.

ICU: the satisfaction of seeing the sickest recover

After graduating from HFC, Corrie transferred to the University of Michigan-Flint, earning her bachelor’s degree in nursing. This fall, she is applying to UM-Flint’s doctoral program in nursing anesthesia. She currently works as a registered nurse at Henry Ford Health System in Detroit.

“I work in the ICU, where you see the sickest of the sick. Being able to utilize my skills with someone who’s that sick is very satisfying, knowing that you helped them,” she said. “What’s even more satisfying is when someone is that close to death’s door and they turn right around – that’s the best part of the job, that’s what makes it all worthwhile.”

In early 2020, Corrie completed a 1-year term as the first newly-licensed director of the American Nursing Association (ANA)-Michigan.

“This was a new position the ANA-Michigan created. They wanted someone on the Board of Directors with less than five years’ experience as an RN and new to the nursing field to bring a different perspective and to bring in the next generation of nurses to this organization,” explained Corrie. “I very much enjoyed it. I wanted to be involved. It was an amazing experience,” she added.

Coping with the stress of the pandemic

In a serendipitous move, Corrie recently earned her certification to teach yoga from 359 Degrees in Wyandotte.

“I was working at the spa at the time when I fell in love with yoga,” said Corrie. “Since then, I’ve had it on my radar to take the teacher-training course (which requires 200 hours). I finally had the time last year. When I took the training, it wasn’t necessarily to be a yoga teacher, but for my own personal practice. Now I want to teach a yoga class to my fellow nurses at work. It’s a wonderful thing.”

Yoga has been invaluable in helping Corrie de-stress during the coronavirus pandemic.

“When the pandemic first happened, we were seeing patients who were very sick, and sometimes we were unable to do anything about it. That was really tough. Very dark times,” she said. “It’s much better now. In those first three months, it seemed every patient tested positive. Our patients now are nowhere near as sick now as they were in the first wave."

As it turns out, both nursing and yoga arrived in Corrie's life at exactly the right time.