Notice: This article is more than one year old and is part of the Henry Ford College news archive. Information in the article may be outdated. For the most current news and information about Henry Ford College, please visit hfcc.edu/news, or contact communications@hfcc.edu.
Release Date:
Friday, October 25, 2019 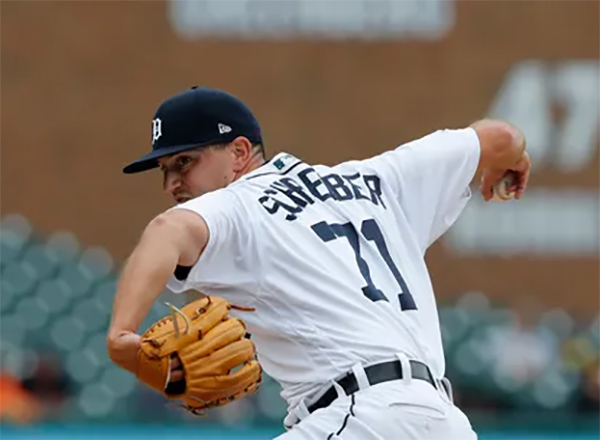 John Schreiber on the mound for the Tigers. Photo courtesy Detroit News.

It is where he proposed to his wife Rebecca, whom he married on Jan. 11 of this year.

It is also where he made his major league debut, pitching for the Detroit Tigers, on Aug. 8. (Watch 1.5-minute video of his debut appearance with the Tigers). According to MLB, he is the first Michigan-born player to pitch for the Tigers.

“It’s amazing! Growing up a Tigers fan, and this year having them call me up, it’s so surreal. I never imagined I’d be playing for the Tigers. It’s just awesome. It’s unbelievable,” said Schreiber, of Rockwood, who’s an alumnus of Carlson High School in Gibraltar.

The right-handed pitcher, who finished this season for the Tigers with a 2-0 record and an ERA of 6.23, played for HFC during the 2012-13 and 2013-14 seasons. Schreiber was drafted by the Tigers in the 15th round of the 2016 Major League Baseball draft, where he signed for a $6,000 bonus (fellow HFC pitcher Kyle Roberts was signed in the 5th round of the MLB draft by the Texas Rangers in 2016).

After signing, Schreiber played for the Connecticut Tigers, a minor league team affiliated with the Detroit Tigers, in Norwich, CT, where he went 2-3 in 18 games with an ERA of 2.76. In 2017, he played for the West Michigan Whitecaps, another minor league team affiliated with the Tigers in Grand Rapids. Playing for the Whitecaps, Schreiber improved dramatically, with a 5-1 record and an ERA of 0.54 in 27 relief appearances.

Schreiber jumped straight to the Erie SeaWolves, another minor league team affiliated with the Tigers in Erie, PA in 2018. There, he finished with an ERA of 2.48 and 18 saves in 23 games, pitching 49 games over the course of the season. In 2019, he began in Erie but was called up to play for the Toledo Mud Hens, the best-known minor league team affiliated with the Tigers. He remained with the Mud Hens until he joined the majors in August.

“It’s incredible, facing guys I’ve seen play on TV. It’s so surreal when you’re up against them,” he said. “I’ve gotten to meet Alan Trammel (the legendary Tigers shortstop who is the special assistant to current Tigers’ general manager Al Avila) several times. He’s a very nice man and always generous with his time.”

A close team bond as an HFC Hawk laid the groundwork

Schreiber spoke fondly about his time at HFC, playing for Coach Steve Brown for two seasons.

It is that same work ethic that Schreiber applies to the Tigers.

“He’s such a great young man who worked hard in the classroom and on the field,” said Brown. “The saying, ‘If you work hard, good things will happen,’ applies to him. John took that route and gutted it out. He always had a lot of potential and was a pleasure to coach. I’m proud of him. I’m happy to see him doing what he’s doing for the Tigers.”

How John Schreiber made it from Rockwood to CoPa: “The kid does things the right way” -- Detroit Free Press