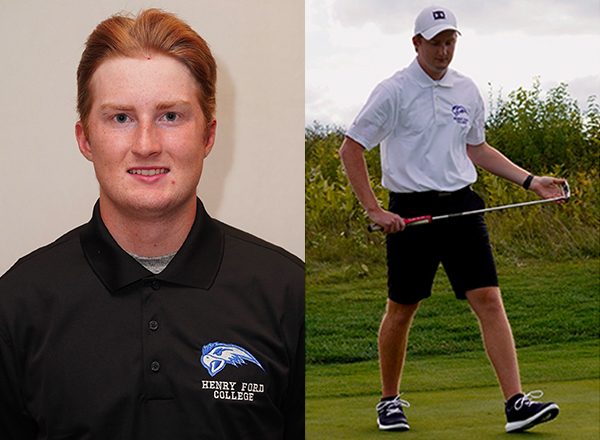 Kosiba, of New Boston, finished five strokes behind the winner to finish second in the conference, while Alana Jones – HFC’s sole female golfer – tied for eighth against all-male competition. Freshmen Joseph Quiton and Donnie Andrysiak earned All-Freshman Team honors. The team as a whole finished second in the 8-team field and was named MCCAA Eastern runners-up.

“I was just showing up and playing my best,” said Kosiba. “It was pretty cool.”

Awards on the course and in the classroom

“I was in shock at receiving these honors,” said Kosiba. “I felt good coming out of my first year with these awards for both golf and academics.”

Kosiba’s grandfather Edward Doyle taught him the basic mechanics of golf when he was 10. Kosiba didn’t get into competitive golfing until high school.

At Huron High School in New Boston, Kosiba played golf for four years, serving as the captain of the golf team his senior year. He also played hockey until his senior year. Upon graduating from Huron in 2018, Kosiba earned a scholarship to golf at HFC.

Loving his classes and his golf

“It’s been great so far. And I’m saving a ton of money going here,” he said.

This spring, he will golf in the National Junior College Athletic Association Golf Championship in Joplin, MU.

“Coach Monaco has been a real help. He’s definitely improved my game. He knows what he’s talking about and I can trust him. It’s hard to find someone you can trust in golf, because having too many people telling you what to do can mess up your game,” explained Kosiba.

“Matt was my very first recruit as a college coach, and he turned out to be everything I could want in a player. He has a great work ethic, both on the course and in the classroom, which is very rare. One of my favorite things about Matt is how competitive he is. He simply wants to win. When the pressure is on, Matt gets better. That can’t be taught,” said Monaco. “His hard work is really showing this year. Matt had a great fall season. He has improved his scoring average by five shots from last year, making him one of the best in our conference. He finished second overall in the conference. In the final three events, Matt held the lowest scoring average in the conference. Matt is also good team guy that is constantly pushing his teammates to improve. I can’t wait to see what he can do in the postseason next spring!”