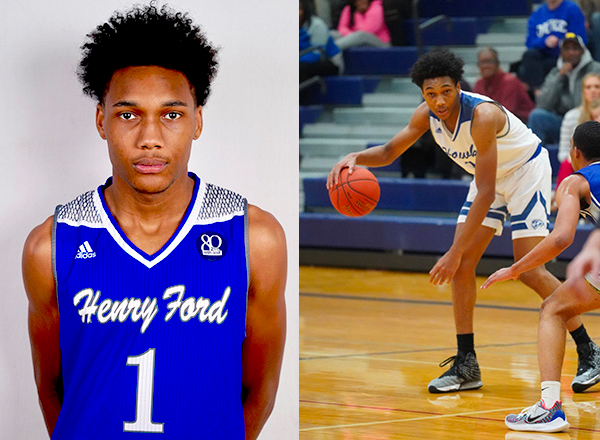 HFC basketball player Leon Ayers will transfer to the University of Wisconsin-Green Bay in the fall of 2020.

In the end, he accepted a scholarship offer from the University of Wisconsin-Green Bay, a Division I school, where he’ll play basketball for the Phoenix, starting in the 2020-21 season.

“Based on the schools that were already talking to me, Green Bay was the first school to come see me play on the first day of recruiting. After that practice, they set up an official time for me to visit their campus and see their program. I loved it. I loved the coaches. It felt like home. It was the place I wanted to go, the place I needed to be,” said Ayers, of Troy, who stands 6 ft. 5.

Ayers was impressed by UW-Green Bay's strong support system for its student athletes, like he found at HFC. After earning his associate degree in general studies from HFC next spring, Ayers plans to study finance at UW-Green Bay.

One of the classes he really enjoyed at HFC was American Sign Language, taught by Jenny Stewart.

“Leon was a great ASL student,” said Stewart. “He was active in class and caught on to what we were learning very quickly. I enjoyed his enthusiasm. I’m happy to hear he’s pursuing his passion with basketball.”

From Colt to Hawk

Born in Detroit, Ayers attended Troy Athens High School as a freshman, where he played on the junior varsity basketball team. After his freshman year, he transferred to Troy High School. There, he continued playing basketball and was on the varsity team from his sophomore year through his senior year, serving as a captain in his final year.

As a senior, he averaged 17.7 points, 4.5 rebounds, and 4.0 assists per game and was named First Team All-Conference in the Oakland Activities Association, as well as First Team All-North Region by the Detroit Free Press. He was also an honorable mention All-State selection. He graduated in 2018.

According to Ayers, he didn’t get many offers to play college basketball while in high school. However, Coach Chris Shepard, now in his third season as head coach of the HFC basketball team – offered Ayers a scholarship to play for the Hawks.

“Coach Shep is my guy. He did a home visit, and we talked for a long time. I knew HFC was where I needed to be. He had a plan for me. My first year playing ball for HFC was everything he told me it would be. He helped get my name out there, and I got 8 or 9 Division II offers,” said Ayers.

At HFC, Ayers led the basketball team in scoring at 17 points per game and was second in rebounding at 5.1 per game. During the 2018-19 season, Ayers helped lead the Hawks to a 23-9 overall record and a Michigan Community College Athletic Association state championship.

“Leon has defied the odds by achieving a lifelong dream,” said Shepard. “He was a qualifier out of high school, which means he didn’t need to attend HFC. He came to us so he could chase a Division 1 dream. For it to come true is as great an accomplishment as you could ask for. I couldn’t be happier for him and his family.”

“I’m grateful for the opportunity to play at HFC. Coach Shep paved the way for me, and I appreciate that. Playing here has humbled me. I know what it’s like not to be recruited and to be the underdog,” said Ayers. “HFC has showed me how to stay the course and grind it out. Even though I didn’t get many offers out of high school, I’m playing Division I basketball, which is every player’s dream.”