Notice: This article is more than one year old and is part of the Henry Ford College news archive. Information in the article may be outdated. For the most current news and information about Henry Ford College, please visit hfcc.edu/news, or contact communications@hfcc.edu.
Release Date:
Monday, July 15, 2019 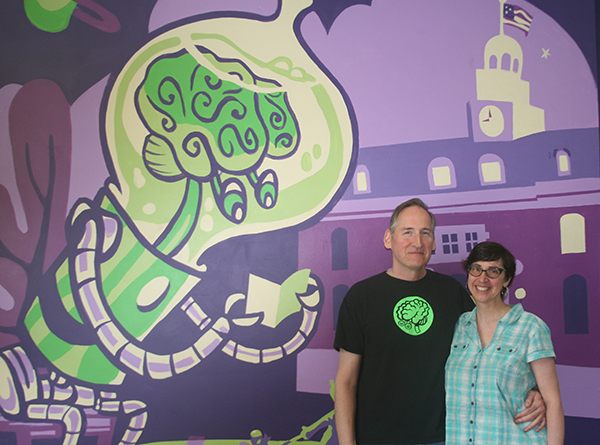 HFC alumnus and WHFR radio veteran Dan Merritt has co-owned Green Brain Comics in Dearborn with his wife Katie – also an HFC alumna – for 20 years. During this time, he has not only promoted comic books as an art form, but also the city of Dearborn.

“I’m always networking. I like making these big connections between businesses and organizations to promote Dearborn as a fun place to spend time and a dynamic place to start a business,” said Dan, who has also served as vice-chairman of the East Dearborn Downtown Development Authority (EDDDA) for 10 years.

It also gave Dan the opportunity to interview comic book creators. Perhaps his most notable guest was artist Joe Quesada, just as he was transitioning from the position of editor of Marvel Comics’ Marvel Knights imprint to editor-in-chief of Marvel Comics in 2000. He held the latter position until 2011.

“I really enjoyed my five years at WHFR. I had a lot of creative freedom,” said Dan. “It allowed me to experiment with the genre of soundtrack music and stretch my horizons. I made a lot of friends at WHFR.”

"As a WHFR DJ, Dan was creative and ultra-passionate about his music. His cutting-edge radio show was a treat to the ears, as well as the brain. Both our staff and the Dearborn community absolutely loved having him on our WHFR airwaves!" said WHFR general manager Susan McGraw.

Dan decided to end Grafik Muzik while it was still on top. He did everything he set out to do with the radio show.

“I wanted to free up my spot for new DJs,” he said. “That’s how I got my spot: Another DJ gave it up. I wanted to pay it forward.”

The Merritts don’t see comic books as “funny books” or something purely whimsical. Comic books have become more mainstream in recent years, given the success of superhero blockbusters, such as the Marvel Cinematic Universe’s (MCU) Avengers: Endgame, which is now the No. 1 movie of all time, with a gross of approximately $2.78 billion.

The source material of the MCU movies is comics, a legitimate cross-platform medium, according to the Merritts. Comics aren’t just superhero fare; that’s just the medium’s most well-known genre. There are comics such as DC Comics’ Watchmen and Batman: The Dark Knight Returns, which have revolutionized the medium and have been taught at the college level.

“Our focus is on comic books as entertainment first. We want to bring attention to the comic books for their entertainment value. Whatever happens after that – if the comic we sell to a customer raises in value and makes money – then that’s a happy accident. To us, comic books are a medium of telling stories,” said Dan.

Added Katie, who has an associate degree in social science from HFC: “We are a bookstore. Our books just happen to have a lot of pictures in them. We’re an independent bookstore that specializes in comics.”

Green Brain opened in Dearborn 1985. It was initially called Comics Plus and was owned by the late Gary Reed, who taught biology at HFC.

Reed was also the founder/publisher of Caliber Comics, which published independent comics and gave many popular creators their start. Caliber’s most famous title is probably The Crow, which was adapted into a 1994 movie of the same name starring the late Brandon Lee (son of martial arts legends Bruce Lee), along with several more films and a TV series. The Gary Reed Independent Creator of the Year Award, which has been awarded for the past three years at the Cherry Capital Comic Con in Traverse City, is named in Reed’s honor.

In 1999, the Merritts purchased Comics Plus from Reed and renamed it Green Brain Comics in 2001. In that two decades, Green Brain has had three homes in Dearborn. Currently, it’s located at 13936 Michigan Ave. in Dearborn – in a building owned by the Merritts.

The name change was for identity and branding purposes. “As a name, we felt Comics Plus wasn’t descriptive enough,” said Dan. “It seemed like more of a question – ‘Comics, plus what?’ The name needed to have a strong identity with an icon and sense of place.”

“Retail is an ongoing sociological experiment,” added Katie with a laugh.

One of the challenges of comic book retailing is predicting customer desires and needs. In the near future, the Merritts want to implement point-of-sale software to evolve their internet business and provide resources to customers that will keep the medium going strong.

Most diverse selection of independent comics -- and an in-store wedding

To celebrate Green Brain’s 20th anniversary, there will be a different event every week for the rest of the summer. All back issues will be 20% off until Sunday, Sept. 1.

In August, Green Brain will host the first wedding in its store, which will really set it apart from the crowd.

The happy couple met at Green Brain, according to Katie, and wanted to have their wedding there. Dan, an ordained minister through the Universal Life Church, will officiate the wedding ceremony.

“We want to create an open and inviting atmosphere,” he said.

Dan is a founding member of the non-profit reading advocacy organization called Kids Read Comics (KRC), which promotes the use of comic books and graphic novels as tools for teaching children. KRC celebrated its 10th anniversary at the annual Ann Arbor Comic Arts Festival (A2CAF).

Also celebrating a milestone anniversary is the HeadSpace Gallery, which is located inside Green Brain. This year marks its 10th anniversary. The Merritts serve as gallery curators. HeadSpace’s exhibits feature the work of artists (not necessarily comic book artists) from all over.

The Merritts have also been involved in the Dearborn Downtown Development Authority's planning efforts toward rebranding Dearborn, including greater integration between East Dearborn and West Dearborn.

“The name of the game is community engagement,” said Dan. “Dearborn’s greatest strength is its cultural diversity. We have a small city feel maintained by big city services with world-class business districts.”