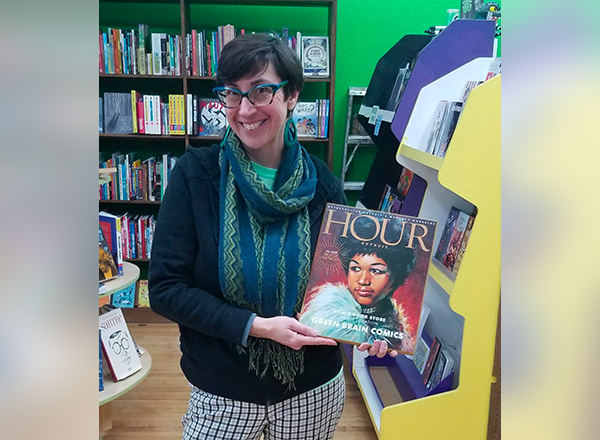 “It’s an honor to be recognized by one of Detroit’s most prestigious magazines,” said Katie, who has an associate degree in sociology from HFC.

Sharing the cover with the Queen of Soul

Katie showed off her three “Best of” covers from 2016, 2018, and 2019 that had been converted into plaques given to her store by Hour Detroit. The most recent plaque has a photo of the late singer/actress Aretha Franklin, alias the Queen of Soul, who died in 2018.

“It’s really cool to be on the same cover with the one and only Aretha Franklin,” said Katie, admiring the plaque with Green Brain’s name superimposed over Franklin’s photo.

Green Brain opened in Dearborn in 1985. Originally, its name was Comics Plus, which was owned by the late Gary Reed, who taught biology at HFC. Reed was also the founder/publisher of Caliber Comics, which published independent comics and gave many popular creators their start.

In 1999, the Merritts purchased Comics Plus from Reed. They renamed it Green Brain Comics in 2001. In those two decades, Green Brain has had three homes in Dearborn. It’s currently at 13936 Michigan Ave. in Dearborn – in a building owned by the Merritts.

Other awards and accolades

Green Brain is no stranger to winning “best of” awards, having been recognized by WDIV-TV (Channel 4), The Detroit News, Metro Times, and Corp! Magazine. In fact, Metro Times readers voted Green Brain “Best Comics Store” a total of nine times. Green Brain has also been nominated five times for the [Will Eisner Spirit of Comics Retailer Award], an award presented annually at the world-renowned San Diego Comic Con.

“Customers love us. Detroit loves us,” said Katie. “This recognition helps get our name out there to different audiences. Hour Detroit readers are a different audience than Metro Times readers, so this exposure is really good for us. Come down to our shop and see why we were voted ‘best of!’”