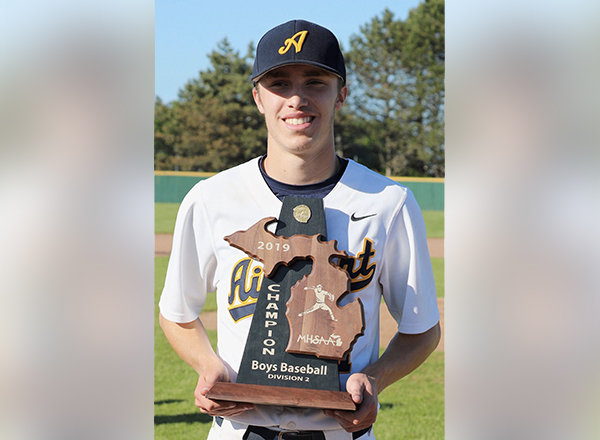 Carleton Airport High School alumnus Luke Goins will play for the HFC Hawks in the 2019-20 season.

A 2019 alumnus of Carleton Airport High School – where his uncles played baseball – Goins played for four years, football for four years, and basketball during his freshman and senior years. He served as captain of both the baseball and football teams, and was named an All-State shortstop. And it wasn't just sports. Goins was a good student, involved in included the National Honor Society and the Captains Council, a club for the captains of Airport’s sports teams.

Goins is attending HFC for the 2019-20 academic year on a baseball scholarship, and he’s studying cybersecurity. Once he earns his associate degree, he plans to continue his education at Eastern Michigan University.

He’s looking forward to playing baseball at HFC under Coach Mike Abney, who’s in his second season as head coach.

“My close friend who played at HFC for the past two years, Jeff Manchester, told me about the program and told me how much he liked Coach Abney,” said Goins. “I’m happy to be a part of a great program and to be able to get a great education at the same time. HFC is a great college with great teachers, students, coaches, and advisors.”

“Luke’s a very hard worker and tremendously sound academically," said Abney. "He’ll earn significant playing time at shortstop or second base. He’s certainly earning his place on the team with his performance – with both the bat and the glove. He’s also very receptive to coaching.”

“He told me to go where it was best for me, but he did tell me HFC has a great baseball program,” said Goins, who was coached by his uncle on the Blissfield American Legion baseball team.

“I had the pleasure to coach Luke the last three years in summer ball,” said Jones. “He always gives 100 percent, which is why he’ll do very well at HFC. Athletically, he’s a good fit. He was a lead-off hitter and had the best batting average of the whole team and played shortstop – very solid. He got better every year. He has good instincts about the game. Very coachable.”

Welcome to the team, and the College, Luke!