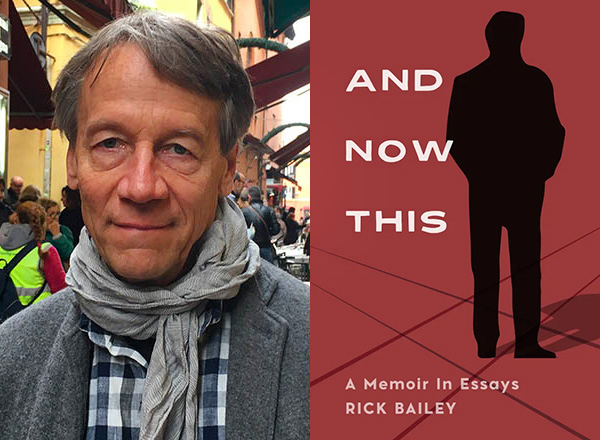 Retired HFC English instructor Dr. Rick Bailey is the author of "And Now This," his fifth book of creative non-fiction. He taught at the College for nearly 40 years, retiring in 2015.

One of the highlights of And Now This, retired HFC English professor Dr. Rick Bailey’s new book of creative non-fiction, is an account of his brief encounter with the mob.

“There was a guy in San Francisco called Gino Gelato,” recalled Bailey. “Just off Columbus Ave, he had a gelato shop and a restaurant called Tazze d'Oro down the road. In the window of the gelateria, he displayed a number of Faema espresso machines. I had one of those back home and needed a part for it. Gino said he had the part, but he was elusive. I sort of stalked him, stumbled into a photo op with (singer) Tony Bennett, then pursued Gino to the basement of his restaurant, where a dozen suits were eating lunch with him. Big mistake, my being there."

To find out what happened, pick up a copy of the book.

Bailey grew up in Freeland, on the banks of the Tittabawassee River in Saginaw County. He has been married to Tiziana Canducci for 45 years, and the two live in Bloomfield Hills. They have two children and two grandchildren.

For nearly 40 years, Bailey taught English at HFC, retiring in 2015. He wrote nine textbooks during his teaching career. Since retiring, he has written five books of creative non-fiction. He explained his creative process.

“I don't really get an idea for a book. I get ideas for essays. I think small,” said Bailey. “I was driving north of town one day. Near a Home Depot, I saw a handwritten sign that I thought advertised ‘Cash for Cats.’ I thought: Who would sell their cat? And why would someone buy them? The next morning, I was working on an essay that turned out to be about cats, donuts, and (psychologist) B.F. Skinner. Another day, I went to a doctor's appointment and was told I had an ‘occult infection.’ A what? That was thrilling. I thought: Werewolf? Right now, I'm working on an essay that started with a search for toothpicks in a kitchen cabinet.”

And Now This picks up where his four other books of creative non-fiction left off.

“The format is similar to my other books,” he said. “And why not? I'm having a delightful time writing these things, and the stories themselves are new. A year ago, my wife and I tested positive for COVID while we were in Italy and had to stay an extra week in quarantine. I read (William) Faulkner in the apartment. The guy in the bar up in the piazza brought us pizzas. Some of the essays in And Now This are about that experience.”

Some of the other topics Bailey writes about in And Now This include:

According to Bailey, the title sums up life in general and his writing life in particular.

To purchase And Now This and to get a signed copy, visit Bailey’s website. After February 1, the book will be available via Amazon, Kindle, and in print formats.