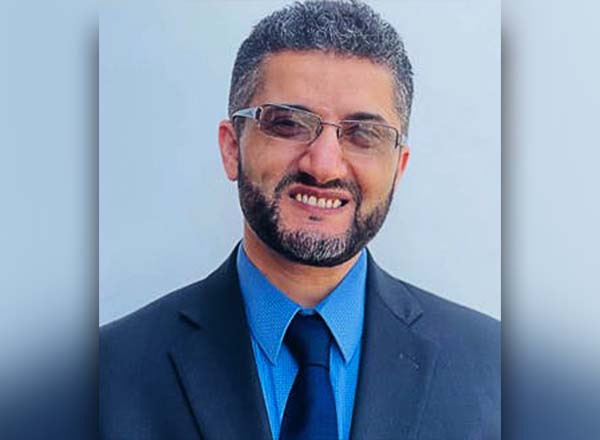 On January 2, HFC alumnus Amer Ghalib experienced a historic moment when he was sworn in as the first Muslim mayor of the City of Hamtramck.

“I’m proud, honored, and humbled to gain the trust of people and to be given the opportunity to serve my city. It’s a big historic accomplishment but also a huge responsibility,” said Ghalib, who is married and has three daughters.

When Ghalib first campaigned, he was a political newcomer. His opponent was Karen Majewski, who had been mayor for 16 years and was the latest in a 100-year line of Polish-American mayors. Ghalib won the Nov. 2, 2021 election by a wide margin.

“It’s not the result of just campaigning – it’s the fruit of many years of serving our community and building good relationships with the residents. I also had a fantastic team that worked smart and hard, and we were able to add so many people who voted for the first time, as well as to gain the trust of people from different backgrounds,” he said. “My good record and history of community service helped during my campaign, despite the disadvantage of less political experience. I believed in myself and in my skills and I was able to communicate well with all residents, explain my platform, and convince them to vote for me.”

“We ran to serve everyone – not just Muslims”

Another historic first for Hamtramck: Three new City Council members are also Muslims. This makes Hamtramck – a suburb of Detroit that is predominantly Polish but has attracted Middle Eastern immigrants in recent decades – possibly the first city in the United States to have both a mayor and a city council who are all Muslim.

“We all made history, but we ran to serve everyone – not just Muslims. It’s the people’s victory, but it’s a big responsibility on all of us. We are in the spotlight and we must work hard to succeed,” said Ghalib.

In yet another historical first, Ghalib is not the only Muslim mayor to be elected in Wayne County. Long-time HFC champion Abdullah Hammoud and Bill Bazzi were sworn in as the mayors of Dearborn and Dearborn Heights, respectively, at the beginning of 2022.

“We have been discussing the challenges we face… and how we can help each other overcome them,” said Ghalib.

A desire to lead

Born in Yemen, Ghalib immigrated to the U.S. in 1997 when he was a teenager. While attending Hamtramck High School, he worked in a factory, where he made plastic auto parts during 10-hour shifts. A teacher encouraged him to work at the factory for 8-hour shifts while devoting two hours to school, which he called a turning point in his life.

After graduating from high school in 2000, Ghalib enrolled at HFC (then Henry Ford Community College), where he studied biology. Transferring to Wayne State University in Detroit, he earned his bachelor’s degree in biology and pre-med. He was accepted at the Ross University School of Medicine in Dominica. He completed four years but did not have the opportunity to complete his residency.

For more than 10 years, Ghalib has been a healthcare professional. Prior to being elected, he worked at the Hamtramck Medical Group, PC under the supervision of Dr. Hazem Samir.

Ghalib spoke about why he decided to run for office. He earned endorsements from several Yemeni political groups and two political opponents after winning the August primary. Ghalib won 37% percent of the vote, while Majewski won 27%. Asm Rahman won 22% and Saad Almasmari won 14%.

“As healthcare workers, we are community servant leaders by nature,” he explained. “The desire to lead and make a positive impact on our community is another reason to run for public office. I want to do something for my city to make it a better place to live. It’s just another way to give back to my community.”

Ghalib also spoke about making the leap from healthcare to politics.

“It’s a transition from a field of strict confidentiality to a field of zero privacy,” he explained. “Throughout my four years of medical school, I learned how to serve people, how to communicate efficiently with people of different educational and cultural backgrounds, and how to diagnose problems and solve them. I’ll use the skills I gained from my medical and science education in the political field.”

Ghalib’s immediate goals are to bring the community together to promote unity and diversity, maintain a healthy relationship with the City Council members and other city leaders, continue to work on removing lead pipes and obtain more federal and state funding.

“I have gone through so many transitions in my life and faced many obstacles. Behind every accomplishment is a long story of struggle and hard work. All of what I have accomplished was done without much support, except for the mayoral race victory, which was the accomplishment of the people first and foremost. I’m proud of what has been done so far, but I believe I haven’t accomplished my full potential and I’ll continue to work toward bigger accomplishments that would put me in a place where I can serve more people and make a positive change in my city and elsewhere.”