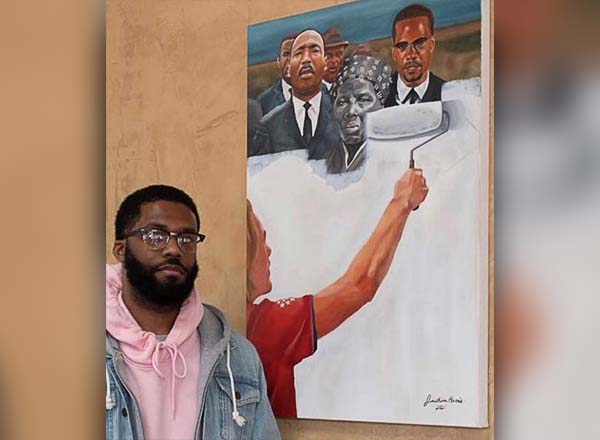 Jonathan Harris stands next to his painting, ”Critical Race Theory.”

“The road in the background represents the road that African Americans have had to travel just to get this far, only to have our histories – our stories – potentially erased,” said Harris, a Detroit native who lives in Bloomfield Hills and studied graphic design and studio art at HFC from 2006-07 and 2019-20.

“History is in ink”

According to Harris, the painting was inspired by the controversy surrounding the removal of CRT from schools. A framework of analysis with its roots in critical theory, CRT is a collection of activists and scholars interested in studying and transforming the relationship among race, racism, and power that began in the United States during the post-Civil Rights era during the mid-late 1960s. CRT also includes the study of systemic white supremacy, segregation, and other forms of institutionalized racism.

Academic critics of CRT argue that it is based on hearsay instead of evidence. Since 2020, conservative lawmakers have sought to ban or restrict CRT from being taught in schools.

These lawmakers have been accused of misrepresenting the importance of CRT, as well as having the goal of broadly silencing discussions of racism, equality, social justice, and the history of race.

“It’s problematic when people want to control how history is taught,” said Harris. “It will be taught in a way that doesn’t tell the truth, which is extremely dangerous. History is in ink. To say you want to rewrite history and change it because students will feel uncomfortable, I don’t think that’s right.”

Since the painting has gone viral, its image has sparked conversation around the issues of race and social justice represented in the artwork. Images of the Detroit-based Old Redford Academy High School alumnus’ painting have been selling out the world over.

“It’s definitely created a dialogue, which I think is good,” said Harris. “This is a subject that needs to be addressed.”

Harris confessed that he wasn’t expecting his artwork to take on the life it did. It has been covered by media including:

“I wasn’t expecting this kind of coverage,” he admitted. “I didn’t know it was getting this kind of attention until a guy from my church tagged me on Facebook. It’s definitely surprising. I liked the conversation this started. People who disagreed with me have shared their views. As long as we have a conversation about this issue, we can make progress.”