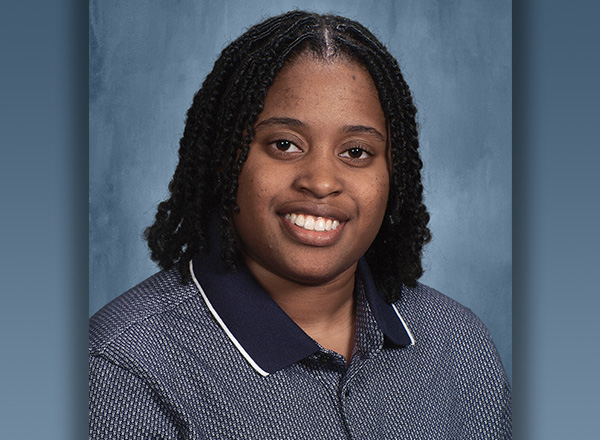 When she moved to Michigan in 2017, Cheyenne Stephens heard great things about HFC, so she enrolled.

“I signed up and have enjoyed my time here ever since,” said Stephens, of Trenton. “The advisors helped keep me around; they’re very helpful, seeing that most of my classes are online. I know if I have any questions, they’re only an email away.”

A native of West Palm Beach, FL, Stephens is the eldest of four. She is also a veteran of the United States Army, where she served two years. She earned her associate degree last spring in business administration. She is taking additional classes at the College as part of the 3+1 articulation agreement with Eastern Michigan University. She will transfer to EMU in Fall 2023 and plans to complete her bachelor's degree in business technology. She then plans to obtain her master's degree in education from EMU.

“I thought I had a good sense of direction, but every day I learn something new about myself. I made a career shift this past year and left the business side of things. Now I am in the education field. I work with kids every day now rather than being in an office all day. I didn’t expect to love it so much. So who knows? You might be looking at a future principal. My ultimate career goal is to do something I love every day, and everything else will follow,” explained Stephens.

From Dec. 1-4, Stephens will be the stage manager for HFC’s production of The Passage, Robert Lawson’s retelling of Herman Melville’s 1851 novel Moby Dick.

“I think the stage manager position is something that most audience members aren't even aware exists, despite the fact that they are arguably the most important person there during performances and literally run the show!” said HFC’s new Director of Theatre Dr. John Michael Sefel.

“When I was a student at Treasure Coast High School in Florida, I joined the drama club and just enjoyed anything having to do with lights and sound,” said Stephens. “Of course, this production is on a totally different scale than high school, but that’s the best part: more things to learn and experiment with.”