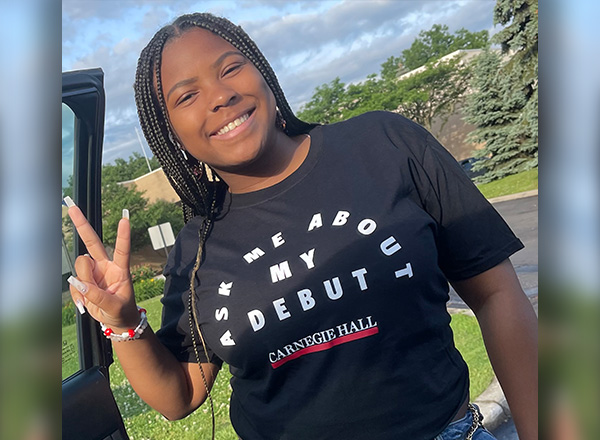 HFC student Courtnee Pruitt was excited when the new HFC Director of Theatre Dr. John Michael Sefel asked her to be one of the stage managers for HFC’s upcoming production of The Passage.

“I have always wanted to be a stage manager; it felt like the perfect role for me. For Dr. Sefel to ask me to be a stage manager for the first show of the season, I was honored,” said Pruitt, of Farmington Hills. “He is a great teacher. He gets the job done and always makes sure everyone is okay.”

The second of three siblings, Pruitt is an alumna of the Advanced Technology Academy in Dearborn. She enrolled at HFC and is currently majoring in theatre. She is scheduled to graduate in 2024.

“During my senior year of high school, I realized that going to a big campus was not my thing, especially coming straight from high school,” recalled Pruitt. “So, a counselor said I should start out at a community college. I was looking over some community colleges and my high school had a connection with HFC. I did some research and loved everything about it, so I decided to start my college education at HFC.”

Member of the Detroit Youth Choir

Pruitt had a passion for singing at a young age. She started singing in her church and was a member of the Detroit Youth Choir. The group sang in notable venues such as Carnegie Hall, Music Hall, the Detroit Opera House, the Fisher Theatre, Ford Field, Little Caesars Arena, the Dolby Theater in Las Vegas, and the Paris Theatre in Las Vegas.

One of the high points of Pruitt’s life was performing in Music Is Forever at Carnegie Hall.

“Being able to perform on the Carnegie Hall stage was the best experience ever. I was 17 years old. This was during my senior year at ATA,” recalled Pruitt. “The process of getting ready for this performance was long and hard, but it was worth it. While in New York, we got to see The Lion King on Broadway. I was able to sing ‘Circle of Life’ to the woman who played Rafiki.”

During her seven years in the Detroit Youth Choir, Pruitt’s acting director Daniel Valentine inspired her to try her hand at acting.

“He pushed me to start acting, and I have loved it ever since,” said Pruitt.

After she graduates from HFC, Pruitt plans to transfer to the University of Michigan and major in communications. Pruitt’s ultimate career goal is to become a professional stage manager.

“This would give me the opportunity to do lots of different shows and travel all over,” said Pruitt.