Get to Know HFC: Instructor Steve Glazer started in math, found his passion in ceramics 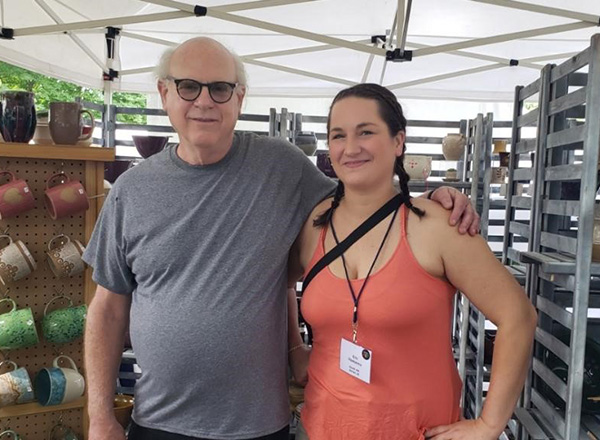 From L-R: HFC Faculty Chair of Fine and Performing Arts Steve Glazer and his former student Erin Hoekzema at the Crosby Art Festival in Toledo, OH. Glazer has taught at HFC since 2004.

Initially, HFC Faculty Chair of Fine and Performing Arts Steve Glazer, who has taught pottery at the College for 18 years, was a math major.

“I was good at math. I could do math like nobody’s business. I remember when I was in geometry, the teacher was explaining a complicated equation. I proposed a different formula, which worked. He asked me how I did that. I didn’t know; I just did it,” recalled Glazer, a Detroit native who lives in Dearborn.

During his senior year, he took an art class that was being taught by a student teacher. She showed him how to use a pottery wheel, which sparked a lifelong passion for art.

“The teacher would write me passes to skip my other classes to use the pottery wheel,” said Glazer. “That became a problem with my other teachers.”

Switching from math to art

When he graduated from Milford High School, Glazer attended Oakland University. He majored in math at first, because his parents did not support him majoring in art.

“I took calculus at Oakland. The professor wasn’t that good and was hard to understand,” he said. “This may seem primitive by today’s standards, but I didn’t have a calculator. I remember taking the final exam. Everybody had a calculator except me. All I had was scrap paper and the formulas in my head.”

Glazer also took art classes at Oakland and excelled in them. Because Oakland didn’t have a ceramics program, he transferred the following fall to Eastern Michigan University. He became a student assistant at EMU. He earned his BFA in art from EMU with a concentration in ceramics and art education.

“Art education was a compromise with my parents,” he said.

A journey around the country

Glazer began his teaching career at the elementary level in Gary, Indiana for a year. His second year, he taught at St. Martin de Porres High School, a Detroit-based Catholic prep school.

“I decided I wanted to teach at the college level because it was a better fit for me,” he recalled.

He began teaching at the college level in 1983. He taught at Saint Mary-of-the-Woods College, a private Catholic liberal arts college in Indiana for two years. He went on to teach at North Dakota State University for two years.

Returning to Michigan, Glazer taught at HFC (then called Henry Ford Community College) as an adjunct instructor for one semester and at Schoolcraft College. In 1989, he became an art professor at Concord College in West Virginia.

“I had never been to the mountains. They were beautiful. That was one of the reasons I took that job in West Virginia,” said Glazer.

After teaching at Concord for 15 years, he applied for teaching positions at Austin Community College in Texas and at HFC in 2004.

“The jobs were identical,” he said. “Both community colleges were looking for someone to teach clay and 3-D design and to work with the school’s art gallery.”

Glazer didn't feel Austin was a good fit. The afternoon he returned home from Texas, he had a message on his answering machine from HFC. So, he interviewed with the College and got the job. He’s been at HFC ever since.

Glazer has been in his current position since 2017. He reports to HFC School of Liberal Arts Associate Dean Robert Yahrmatter. Under his leadership, HFC’s art program has developed articulation agreements (agreements that specify transfer classes and processes) with EMU and Wayne State.

“I enjoyed working on those agreements and seeing HFC students go on to be successful at EMU and Wayne State,” said Glazer. “Setting up articulation agreements to help HFC students has become a passion for me.”

“I love seeing students almost living in my ceramics room. They’ll bring their friends sometimes to show them what they’re doing. Doing it that way has really opened a door in the Middle Eastern community here in Dearborn,” said Glazer. “I love entering a classroom and seeing students who may or may not look like me. That’s really cool.”