Notice: This article is more than one year old and is part of the Henry Ford College news archive. Information in the article may be outdated. For the most current news and information about Henry Ford College, please visit hfcc.edu/news, or contact communications@hfcc.edu.
Release Date:
Wednesday, January 12, 2022

Get to Know HFC: Dr. John Rietz and a lifetime passion of teaching English 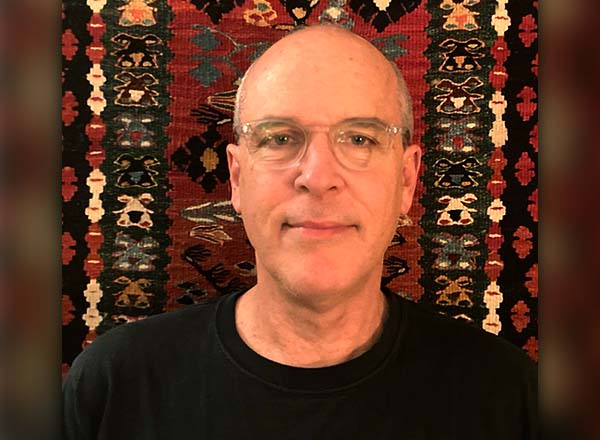 Dr. John Rietz, who has been an English professor at HFC for nearly 30 years, is the faculty member with the longest tenure in the School of Liberal Arts (SOLA).

“I still see the world from the younger brother’s perspective,” said Rietz, of Ann Arbor, the sixth of seven children. “I may be the senior faculty member of SOLA, but it feels like everyone around me is the grownup. I still feel like the junior member,” he added with a laugh.

Rietz is an alumnus of Archbishop Hoban High School in Akron, OH. He completed his undergraduate and graduate work at Kent State University in Kent, OH where he earned his bachelor’s degree in English and psychology and his master’s degree in English. He was valedictorian of his undergraduate class. Rietz would later earn his Ph.D. in English Language and Literature at the University of Michigan in Ann Arbor. His dissertation was on the works of poet Walt Whitman.

When asked what inspired him to become an English professor, Rietz replied that he doesn't think it is an inspiring story.

“I kind of backed into it,” he recalled. “A professor in Kent’s English department recruited me into the master’s program. She asked me what I planned to do with my bachelor’s degree after I graduated. I said, ‘I don’t know.’ ‘Well, consider our English graduate program.’ So I applied. As a graduate student, I was offered a teaching assistant fellowship to support myself and pay tuition. I found I liked teaching. For three years after finishing my master’s, I was an adjunct at Kent and the University of Akron. I decided to make it official and turn it into a career. So I earned my Ph.D. and applied here at HFC. I felt like I won the lottery when I got this job.”

Rietz began teaching at HFC (then Henry Ford Community College) in 1993. He spoke about what attracted him to the College.

“The fact that it was full-time was a big deal,” he explained. “I’m really interested in teaching the basics. Some people get tired of dealing with the basics, but I find it really interesting to talk with students about such things as, why do people use metaphors? What makes something a poem? How you do you communicate effectively? Those basic things I find really gratifying to dig into and help students explore.”

Rietz continued: “I can say after I taught for a few years… if someone really loves their academic discipline, it can be painful to have beginners handle it clumsily. However, if you like people as well as your discipline, you will enjoy teaching for the long haul. Every semester is new, because it’s a new set of students.”

“If I were teaching at a university or a private liberal arts college, I would feel like I was helping the privileged maintain their privilege,” he said. “At a community college, there’s a mission aspect to teaching. We're giving people a leg up that they wouldn’t have otherwise. My mother was a teacher and my father was a social worker. Sometimes I think this job is a little bit of both.”

“In ENG 94, we’re teaching students how to write and orienting them to academic culture and what it means to be a college student. I feel like I’m benefiting the students more deeply here than in a lot of other classes,” he said. “Part of my job and part of who I am as a human being is to treat people with respect. I think students recognize that. I believe it’s the right kind of environment for people to learn at their highest level and feel that the classroom is safe, and that there’s someone who has their best interests at heart.”

For Rietz, the best part of his job is the students, cliché as it may sound.

“I enjoy connecting with students over academic subjects that I really care about,” he said. “I have good colleagues here, some of whom are my best friends.”

He spoke about the most challenging part of his job, but keeps it in perspective.

“Grading papers, which is what every English teacher will tell you. There’s a lot of grading involved in teaching English,” he said. “However, there’s much harder labor in the world than grading papers. And there is this truth to grading: When I sit down to actually do it, it’s not that bad. I often find the my students’ essays very interesting. I’ve always been interested in history and culture. Teaching English allows me to explore all of that.”