Get to Know HFC: D. Mark Hall is a Marine, producer, and teacher 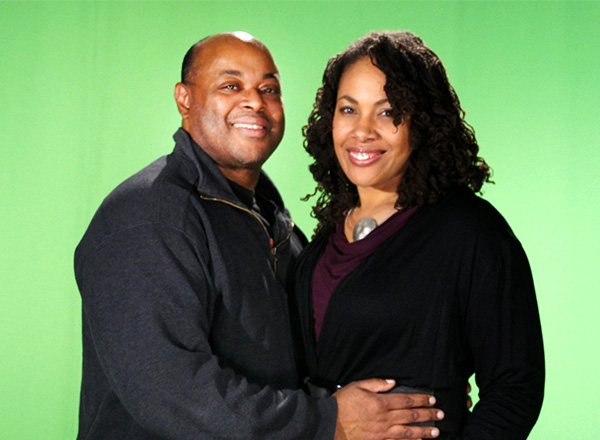 HFC alumnus D. Mark Hall is a lab technician in the College's telecommunication program. He is pictured here with his wife of 13 years, Tracie Renee Hall. He would like to one day teach at HFC.

HFC lab technician D. Mark Hall’s ultimate goal is to teach telecommunication at the College, which has given so much to him.

“I come from a family of educators and preachers. And I’m not built for the pulpit,” said Hall with a laugh. “I currently mentor students in the telecommunication program and at WHFR-FM (HFC’s student-run radio station). Everything they’re doing, I’ve done. I take great pleasure in seeing the lightbulb come on. I have a strong desire to work with students.”

An only child, Hall lives in Detroit with Tracie Renee Hall, his wife of 13 years. He graduated from Troy High School. He completed coursework at Morehouse College and at HFC (then Henry Ford Community College). Hall eventually earned his associate degree in telecommunication, where he was mentored by retired HFC telecommunication professor and radio personality Jay Korinek.

After serving overseas, Hall was stationed in the 1st Battalion, 24th Marines in Perrysburg, OH, which is known as the "Terror of the North." His final rank was corporal before being honorably discharged.

After mustering out of the USMC, Hall worked as a quality inspector at Chrysler. He worked for the automaker for 16 years before taking a buyout to work in Michigan’s burgeoning yet short-lived film industry. He interviewed with Michigan Motion Picture Studios in Pontiac, which is where 2013’s Oz: The Great and Powerful was filmed.

In 2020, Hall joined HFC, where he reports to HFC Chairperson of Communication and Media and WHFR General Manager Susan McGraw.

"Mark has been a valuable student volunteer and creative member of WHFR Radio for many years. And now, as part of our telecommunication team, he's using the skills he's honed in the classroom and on our campus to support students in their success here at HFC,” said McGraw. “Mark's positive energy and commitment to helping others is an asset to our media arts department and I'm proud of his growth and commitment to share his passion for learning with others."

This summer, Hall will mentor HFC telecom students who are participating in Detroit’s 48 Hour Film Project July 29-31. Filmmakers from all over Metro Detroit will compete to see who can make the best short film in a span of two days.

“I’m very energized to be passing on my knowledge of film to these students. They’re a collective of like minds – directors, writers, producers, audio/visual,” he said. “It’s very motivating and energizing to support HFC students.”

Hall is also working on his certificate in recording engineering at HFC and plans to finish in late 2022. His plan is to transfer to the University of Michigan-Dearborn, where he will complete his undergraduate and graduate work.

“I feel a great deal of responsibility passing institutional knowledge on to students. It’s very humbling and rewarding," he said. "There’s no words for it. Once I finish my master’s degree, I would like to come back and teach at HFC. It’s my calling.”