Get to Know HFC: Anne Dinnan and an international approach to religious studies 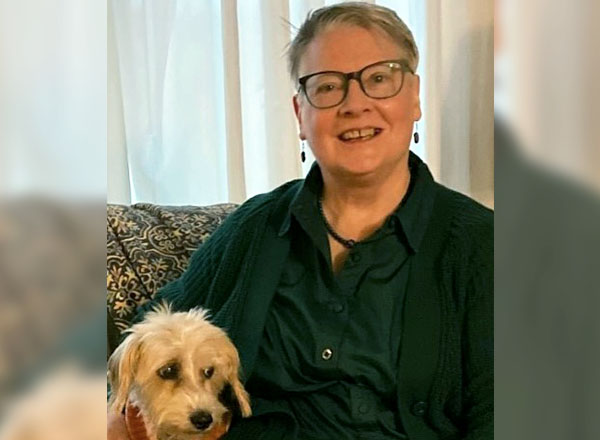 Anne Dinnan (pictured with her dog, Twiggy) has taught religious studies at HFC since 2010.

For Anne Dinnan, teaching religious studies at HFC is a culmination of a lifetime’s work.

“I’m very passionate about this topic. It opens your mind to many different perspectives,” said Dinnan, of Ypsilanti. “I’ve always been interested in religion and other cultures. I grew up in a church that had a lot of missionaries. I got to know many people from around the world growing up.”

Born in Painsville, OH, Dinnan’s family moved to the Metro Detroit area when she was 2. Her father was a librarian and her mother was a teacher. At first, the family lived in Oak Park, then eventually settled in Westland, where she graduated from John Glenn High School. Upon graduation, she earned her bachelor’s degree from Nyack College, a private Christian college outside New York City, where she majored in English and minored in Bible.

“Here I was: A White girl from the Detroit suburbs paired with a Black girl from Brooklyn. We clicked from the first day we met and I soon joined her and some other friends in a gospel group that sang in mostly Black churches throughout the New York metropolitan area. Through my friendship with Pam, as well as my studies as an English major, I learned to listen and empathize with the experiences of others and formed a lifelong commitment to multi-ethnic, multi-cultural engagement,” explained Dinnan, a Christian who is active at Huron Hills Church in Ann Arbor.

After completing her undergraduate education, Dinnan earned her teaching certificate in secondary education with a concentration in English and social sciences from the University of Michigan in Ann Arbor. She earned her master’s degree in missions/intercultural studies from Wheaton College in Wheaton, IL.

Dinnan subbed in the Metro Detroit area and also worked in a local church before landing her “first real job” as a curriculum development editor at David C Cook, the largest independent Protestant publishing company in the U.S. at the time. She worked there for 12 years as part of a team of editors and designers, updating Sunday School curricula for both the middle and high school levels, as well as developing award-winning youth group program materials.

“I loved this job, but felt a tug toward a cross-cultural experience,” she said.

“We reached out to refugees from all over the world who were fleeing oppression and war in their home countries and seeking asylum in the European Union. We ran a drop-in center where we served tea and coffee, played games, gave out clothing and other necessities, and offered friendship and a place to go outside of the refugee camp,” said Dinnan. “Most people came freely and openly discussed their own beliefs and traditions, which I greatly enjoyed. It truly was – and still is – an oasis offering love and a safe place for people experiencing incredible trauma and uncertainty.”

After returning to the U.S., Dinnan worked in the home office, then for Shelter for Life International, a humanitarian aid organization in Minnetonka, MN. She spent eight months in Afghanistan helping a nurse develop a health education training program for schools. Dinnan went to Afghanistan just three months after the 9/11 attacks, arriving on Christmas Eve, Dec. 24, 2001.

“It was amazing seeing life there, experiencing life there. My first impression was that I had stepped back into Biblical times. Their way of life had been destroyed because of 20 years of war,” she said. “When I arrived in Afghanistan so soon after 9/11, it was the best time to be there. Everyone was so hopeful and grateful to American for defeating the Taliban. I’m heartbroken by what is happening there today.”

Teaching at the college level

Upon her return, Dinnan felt adrift once again, feeling she no longer fit in. She left the mission without knowing what she would do next. Dinnan found a new path not long thereafter when she saw a job posting for a religious studies professor at McHenry County Community College in Illinois.

“I had my Bible minor from undergrad, enough theology and philosophy courses from my master’s program, and my personal experience with people of other faiths – especially Islam. I thought that variety of experiences must be worth something,” she recalled. “I beefed up my understanding of Eastern religions and developed a better academic understanding of religions I thought I already knew: Judaism, Christianity, and Islam.”

Dinnan learned a lot in those two semesters and enjoyed teaching. She has also taught at the College of Lake County in Grayslake, IL and Washtenaw Community College in Ann Arbor. She joined HFC in 2010, teaching religious studies.

An unsung star at HFC

“Anne is a superb professor. Her knowledge of religious studies is grounded not only in academic training, but also in substantial personal experience working directly with individuals and groups overseas. I can also tell you that she is one of our most sought-after instructors. Students enjoy her teaching style, her kind and welcoming demeanor, and they respect her knowledge. Anne is an unsung star at HFC,” said Dr. Joel Geffen, HFC religious studies professor and coordinator.

For 11 years, Dinnan has taught Religious Traditions in the World at HFC. In the Winter 2022 Semester, she will teach this class and Judaism, Christianity, and Islam.

“Anne has great expertise in this area. She will explore both scriptural traditions and social justice issues of direct relevance to HFC's students and will do this in interesting ways,” said Geffen.

Dinnan really enjoys the diversity of age levels and life experiences at HFC. For her, it’s a joy to teach at the College, especially teaching students who are returning to get an education at a more mature age.

“It’s exciting to teach young people who see life’s possibilities ahead of them,” she said. “I love the community there. The fact that a large percentage of students are Middle-Eastern or Muslim – that’s very unique. I use a different approach at every college community where I teach. I have a lot in common with my Muslim students: A basic faith, belief in God, and moral principles. We have a lot more in common than many think.”