Get a “Clue” – HFC librarian in shadowcast of movie 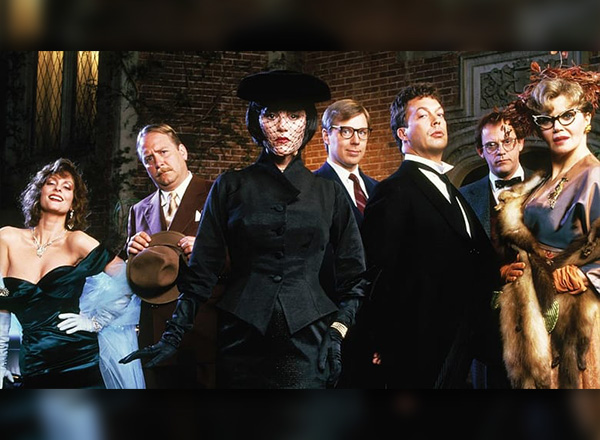 Even though HFC User Librarian Tessa Betts’ character, Mrs. Ho the cook, dies early on in the shadowcast version of 1985’s cult classic mystery-comedy Clue, she’s looking forward to a night of fun.

“Some of the fun is carrying the bodies on and off the stage,” said Betts, of Livonia, with a laugh. Betts, who also serves as the stage manager, is a member of the Goblin King Players, an acting troupe based in Flint.

The Clue shadowcast will play at the historic Redford Theatre in Detroit on the following dates and times:

What is a shadowcast?

A shadowcast is when a film is shown on the big screen while actors onstage expertly move in time with it, resulting in screen-accurate costuming, choreography, set pieces, props, and action.

In the last year, the Goblin King Players have performed shadowcasts of the following movies:

Betts appeared in all three shadowcasts. She was supposed to participate in a shadowcast of 1987’s The Lost Boys, the cult classic vampire movie with Kiefer Sutherland, but the pandemic nixed that, much to her disappointment.

“I played Hoggle in Labyrinth, but you wouldn’t know it under all that makeup,” she said.

Betts has rehearsing for her role in Clue since July.

“I’ve watched the movie 8 million times, making sure I get the lines and body language right. When practicing, I have a large mirror facing the TV several feet away, so I can get the actions down,” she explained. “Clue is more character-driven rather than prop-driven. It isn’t effects-heavy like the other films we’ve done. It’s more about making sure you hit all your marks than worrying about a giant sandworm like in Beetlejuice.”

The shadowcast is the brainchild of Kristina Lakey, who was in drama club with Betts at Davison High School.

“Kristina had this crazy, brilliant idea to put on Labyrinth and treat it like 1975’s The Rocky Horror Picture Show (where the audience sings and dances to it), but only with screen-accurate costumes and performances, so we’re matching the movements on the big screen,” explained Betts. “This way, the audience is not only watching the movie, but they’re experiencing it – they’re immersed in it. We stay true to the film because that’s how shadowcasts work.”

Was it Mr. Green with the lead pipe? Or Mrs. Peacock with the candlestick?

When it was released in 1985, Clue – which is based on the Hasbro board game of the same name – did not do well at the box office, despite having big names like Tim Curry (Rocky Horror), Christopher Lloyd (Back to the Future), Martin Mull (Mrs. Doubtfire), Eileen Brennan (The Last Picture Show), Oscar nominee Madeline Kahn (Blazing Saddles), Michael McKean (Better Call Saul), and Oscar nominee Lesley Ann Warren (Victor/Victoria).

Clue did pick up a substantial cult following on home media. The film’s initial release feature had only one of three possible endings sent to theaters at the time. When Clue was released on home media, all three endings were presented sequentially.

The plot of Clue – which pokes fun at various tropes from the genre – brings together a group of complete strangers who arrive at a secluded mansion in New England circa 1954 through an ominous invitation. These people are each given a weapon by the person who coerced them into coming. Suddenly, the lights go off, and when they come back on, their blackmailer is dead. Throughout the course of the evening, they try to stay alive as people get picked off one by one in a string of murders while they attempt to learn the murderer’s identity.

A feather in the Goblin King Players’ cap is Tim Curry recorded a promotion for the Clue shadowcast. Curry’s acting career has spanned more than 50 years, having appeared on both stage and screen. Notable roles include Rocky Horror, the Darkness in 1985’s Legend with Hollywood action hero Tom Cruise, and the evil Pennywise the Dancing Clown in 1990’s It (based on the Stephen King novel of the same name). He has also received acclaim for voiceover work, including Darth Sidious on Star Wars: The Clone Wars and an Emmy-winning turn as Captain Hook on Peter Pan & the Pirates.

“Who doesn’t want to be recognized for a cult classic? It's really cool that we got his blessing. That says a lot about our production. It brings a lot of gravitas to it,” said Betts. “The Clue shadowcasts will be a lot of fun. We’ve thrown in some cool bits, so it looks and feels more immersive. We’ve enjoyed bringing Clue to life and making it fun. Everyone will have a good time.”

For questions or more information, contact the Redford at 313-537-2560 or goodtimes@redfordtheatre.com.