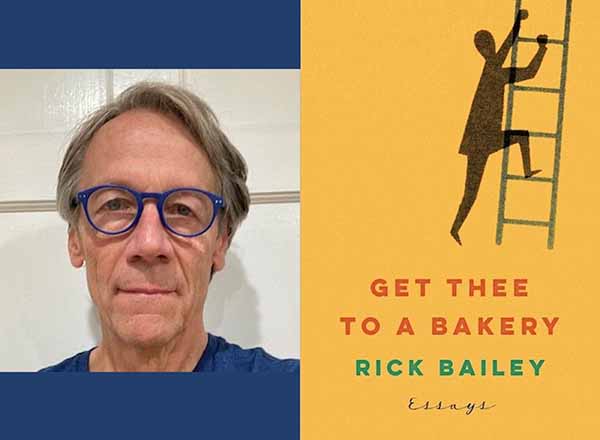 Dr. Rick Bailey, a retired HFC English professor, has penned his third book of creative non-fiction called "Get Thee to a Bakery."

Retired HFC English professor Dr. Rick Bailey’s third collection of creative non-fiction, Get Thee to a Bakery, will be released Monday, March 1, published by the University of Nebraska Press.

Bakery revisits subjects like home and family, food and health, travel and technology, all of which Bailey has explored in his first two collections: 2017’s American English, Italian Chocolate and 2019’s The Enjoy Agenda. Initially, it was supposed to be called The Celebration Lunch.

“I was thinking of that title until I wrote the book’s title essay, Get Thee to a Bakery,” said Bailey, of Bloomfield Hills. “Both my publisher and I thought the bakery title, because of its echo, would be catchier.”

Bailey, who retired from HFC in 2015 after 38 years, wrote several textbooks while teaching at the College. He also wrote every day with his composition classes. Since retiring, he has continued writing on a daily basis, chronicling his travel and culinary adventures.

“My publisher refers to the book as ‘memoir in essays.’ It’s definitely ‘legacy work,’ memory capture of moments, vignettes, and events in the present and the past,” he explained. “My topics? Pumpkin pie, ear worm, the American smile, a velociraptor’s footprint I came across in Arizona, the great bug die-off, travel in the United States, Italy, and China.”

Bailey spoke about his favorite piece from this collection.

“I really like the essay on smiling. I recall the poet Robert Bly saying, ‘You can always tell an American in Europe. He’s smiling.’ We’re a smiley people. People in other cultures, not so much,” explained Bailey. “The essay begins in an airport, where there are many smiling Americans, and I’m there smiling idiotically too. It was a fun essay to write.”

Although he is enjoying retirement, which has given him the opportunity to travel and write and spend time with his family, Bailey admits that he misses the classroom.

“I miss my colleagues,” said Bailey. “And I miss being in the classroom, a place I lived and felt really myself for 38 years.”