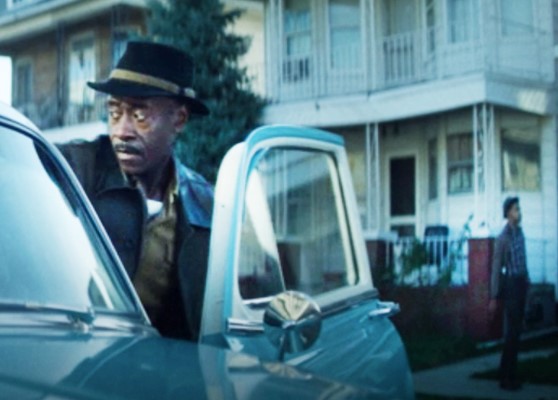 It was the thrill of his life for HFC student Jesse Williams III (far right) to appear in a movie with his favorite actor Don Cheadle (left), even if only for a moment, in "No Sudden Move," which was filmed in Detroit. Photo by Claudette Barius.

Don Cheadle, who was nominated for an Oscar for 2004’s Hotel Rwanda, is HFC student Jesse Williams III’s favorite actor. Williams was over the moon that he got to work with Cheadle, albeit briefly. in the film, No Sudden Move (view the official trailer here), a crime thriller set in Detroit circa 1954.

“I’ve always respected the genius of Don Cheadle,” said Williams, of Redford. “He’s a genuine guy who understands the assignment. His outstanding performance carries every frame he appears in. I guess that's what makes him so iconic. Hotel Rwanda is my favorite film of all time.”

He continued: “When I first saw the movie in middle school, we had just spent two weeks studying the 1994 Rwandan Genocide. I was awestruck by the performances of Cheadle and Sophie Okonedo. I certainly never imagined that I would ever be sharing the screen with my favorite actor. On the day I went on the set of No Sudden Move, I had no idea what to expect or who would be filming that day. I’m standing by this door and he walks out. I wanted to freak out and go all fanboy, but I also wanted to keep my job, so I remained professional. He was very cordial to me. After we filmed the scene, I guess the rest is history.”

Detroit is a character in the movie

No Sudden Move begins with Goynes (Cheadle), a small-time hood who’s just out of prison and needs money, getting roped into a scheme by a go-between named Jones (Fraser) to “babysit” auto exec Matt Wertz’s (Harbour) family with Russo, while Charley (Culkin) takes Matt to his office to retrieve top secret documents. But... the documents aren’t there, and the babysitting job goes sideways. Goynes won’t let Charley murder Wertz and his family, killing him instead. Soon thereafter, Detroit’s criminal elite and corporate titans come after Goynes in a deadly game of double-cross and triple-cross.

Williams appears in the movie as an extra. He can be seen in the trailer at 1:03 in the lower right corner. He plays a pedestrian carrying a lunchbox and smoking a cigarette as Goynes gets out of the car and Russo (del Toro) says, “I’d like to listen to the radio.”

Williams spoke about his involvement in No Sudden Move. He noticed plenty of old cars and white trucks indigenous to the 1950s while driving on the Southfield Freeway.

“In the interest of curiosity, I made my way to Rosedale Park to see if a movie was being shot there. There was a street that reminded me of Detroit in the 1950s. The fact that a movie was being made in the city excited me, and I wanted to see if I could participate,” said Williams. “Not really knowing that I would actually make it. I drove to my grandmother’s house, which was about 20 minutes away, and I searched what movie was being filmed in Detroit.”

At the time, No Sudden Move was initially called Kill Switch. Williams learned Janet Pound of Pound & Moody Casting in Farmington Hills was the casting director. So he sent her his headshot and résumé. Two days later, Pound contacted him.

“Taking part in this film, one of the most interesting films I've ever seen, was a true privilege,” said Williams. “I am proud to say my Hollywood story started in my hometown of Detroit.”

“Director Steven Soderbergh is a creative giant in his own right. It's not hard for him to make actors trust his process since he knows exactly what he wants. On the set, he seems utterly focused on capturing his vision, which is impressive to see,” said Williams. “Ed Solomon is a prolific screenwriter who is meticulous with his details. The film transports you back to Detroit in the 1950s. The research was an integral part of his process, and he kept on top of it…The best part of this whole experience was being on set with Steven Soderbergh, Don Cheadle, and Benicio del Toro.”

“Acting was a passion”

A Detroit native and the eldest of four, Williams’ path as an actor was shaped when he was 6. He played a munchkin in a church production of The Wiz: A Spiritual Journey, based on the 1978 film The Wiz, starring Motown legend Diana Ross, Michael Jackson, Ted Ross, Nipsey Russell, Richard Pryor, and Lena Horne.

“From there I knew acting was a passion. Years later, I joined the Motor City Youth Theatre in Livonia,” said Williams. “I started getting roles in local theatre productions around the city of Detroit for about 10 years.”

Williams is also a singer, something he has done since he was 10. In his church choir at Greater Emmanuel Institutional Church of God in Christ in Detroit, he sang alongside gospel singer/actress Kierra Sheard and gospel singer Derrick Starks.

“In the hallway on my audition date, my English teacher heard me singing and called vocal educator Cheryl Valentine to hear me sing,” recalled Williams. “She took me into the Black Box Theatre in Detroit to hear me sing. She mentored me and trained me to sing classical, opera, and jazz throughout high school. She saw potential in my voice, and she snatched me from my radio and TV major to become a vocal music major. We had the honor of touring South Africa in 2016 as a part of the Ilhombe! South African Choral Festival.”

When he was a junior at the Detroit School of the Arts (DSA) High School, Williams was one of the singers Valentine selected to perform with Grammy-winning singer Patti Austin.

“That was a very exciting moment for me,” said Williams. “When I was in high school, I would never have imagined I would be on the stage singing behind her. I mean, she is a musical giant.”

HFC prepared him for his acting career

After graduating from DSA in 2017, where he majored in vocal music, Williams completed coursework at Virginia Union University in Richmond, VA and Western Michigan University in Kalamazoo.

“In 2019, I went on a six-month hiatus to decide which education career I wanted to pursue,” said Williams. “When I researched different community colleges, I decided on HFC because it made sense to me, and the (telecommunication) major seemed relevant to my goals.”

Williams will complete his associate degree in telecommunication at HFC by the end of 2021. Afterward, he plans to transfer to Wayne State University. There, he plans to major in media arts and minor in film.

“The education I am receiving at HFC has been excellent. The telecom curriculum rigorously prepares me for a career in the media industry,” he said.

Building a suit of armor

Williams wants to finish his education first before heading for Hollywood.

Attending HFC has given Williams a confidence he didn’t know he had, which will serve him well in his career. He considers HFC Chairperson of the Department of Communication and Media and WHFR General Manager Susan McGraw his mentor.

“I am grateful to my professor, Susan McGraw, who helped me secure my internship with the Mosaic Youth Theatre of Detroit as a summer intern,” he said. "Being an actor is difficult because rejection is inevitable. In my career as an actor, I hope to have longevity and to play a leading role in a Hollywood film some day. Doing the work is what makes it fun to be an actor. You must enjoy the process of studying and training to become an actor. It’s like building a suit of armor to go out and find work. It's true, you'll be rejected 50 times, but with that armor you've built, you'll succeed to get that ‘yes’ at number 51.”