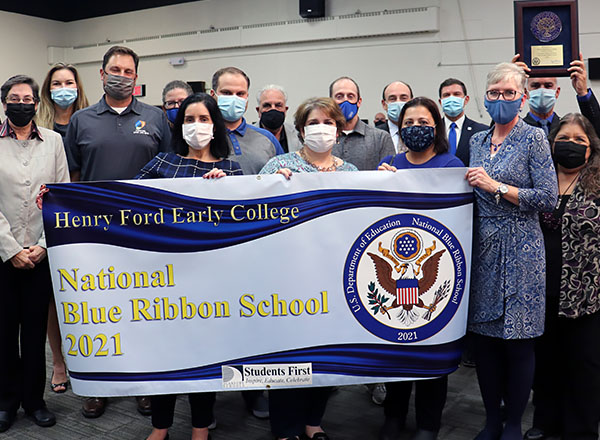 Members of the HFC Board of Trustees and representatives of the HFEC proudly show off the National Ribbon School banner.

It was announced in September that HFEC and Haigh would be two of 325 schools nationwide to receive this recognition.

This award affirms the hard work of students, educators, families, and communities in creating safe and welcoming schools where students master challenging content. The National Blue Ribbon Schools flag gracing a school's building is a widely recognized symbol of exemplary teaching and learning.

Of the 325 schools, 13 schools were in Michigan. Of the 13 schools, HFEC was the only high school, stated HFEC Principal Majed Fadlallah, who attended the ceremony in the nation’s capitol alongside HFC President Russell A. Kavalhuna, Dearborn Public Schools Superintendent Dr. Glenn Malekyo, and Haigh Principal Zachary Short. HFEC is only the 10th high school in Michigan to be honored with a National Blue Ribbon Schools Award since the program started. All the other high schools were in higher-income districts.

“As we received this award in D.C., they told us to brag, so I’m going to brag,” said Fadlallah. “I am very, very proud of our students. I am thankful for the parents who trusted us with their kids. I am extremely appreciative to the staff and faculty of HFC. Without them, none of this could happen.”

HFEC is a partnership among HFC, the Dearborn school district, and Henry Ford Health System in coordination with Wayne County Regional Educational Service Agency and the Michigan Board of Education.

HFEC is a 5-year program in which students can simultaneously complete high school, earn college credits leading to an associate degree, and receive certification in an allied health profession at no cost.

Launched in 2007, HFEC is headquartered at HFC, which is the only community college in Michigan to be affiliated with a P-12 district. HFEC was the first of four early middle college programs in the Dearborn district. Currently, HFEC has 240 students enrolled.

“As a citizen of this community, this is extraordinary but ordinary in Dearborn, if you look at the success rate this public school district puts out with its size and – frankly – with the challenges it has,” said Kavalhuna. “The HFEC is a national model, such that one of our United States senators and one of our congresswomen told us we are a national standard. That’s something you can be extraordinarily proud of, and it is something Henry Ford College is extraordinarily proud of.”