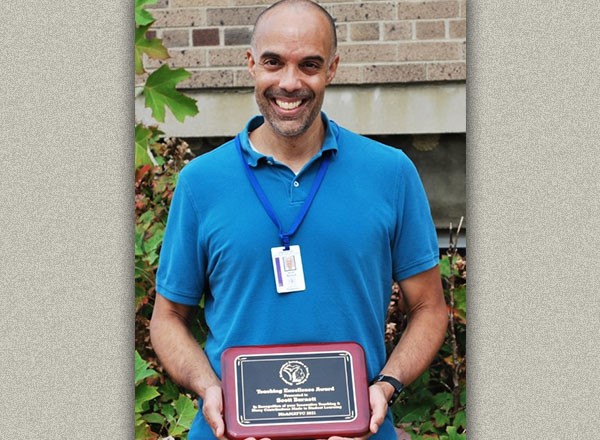 HFC math professor Scott Barnett shows off his Teaching Excellence Award, which he recently won. He has been at HFC since 1998.

HFC math professor and faculty chair Scott Barnett has recently been honored with the Teaching Excellence Award by the Michigan Affiliate of the American Mathematical Association of Two Year Colleges (MichMATYC). He was nominated by his colleagues.

“I'm truly not sure that I was the instructor most deserving of this award. Right here at HFC, we have other math instructors who are very innovative in the classroom and very effective with students. I learn a lot from their work and also from the work of others outside HFC,” said Barnett, a Detroit native who lives in Redford Township with Glenn, his partner of more than 10 years.

When asked what inspired him to teach mathematics, Barnett said there wasn’t any particular moment or event that set him on this path.

“I really got into math-type puzzles as a young child. I did well in math in elementary and high school, and I really enjoyed it. By around fifth grade I had some idea that I might want to teach, though we had a TRS-80 Color Computer (aka CoCo) at home, and I had found that I really enjoyed programming, too,” he recalled. “At different points I considered majoring in math, computer science, or chemistry as an undergrad. Some combination of realizing that – despite my generally being introverted and a bit socially awkward – I'd rather work directly with people, and realizing that I didn't really want to with chemicals sent me further down the ‘teaching math’ path. Plus: I simply enjoy math!”

Barnett came to HFC in 1998, teaching while he was still at CMA. He became a full-time instructor at HFC in 2000. He was been the faculty chair of the math department since 2018, after serving as coordinator since 2015.

“I can’t imagine working with a better group of colleagues”

This semester, Barnett is teaching Discrete Mathematics and Differential Equations. His favorite class to teach is Linear Algebra.

“I love the connections among concepts and the chance to work with students on both a bit of abstract mathematics and some very concrete applications,” he said. “For me, the best part of teaching is seeing a student ‘get it.’”

Barnett is inspired by his students and his colleagues.

“I can't imagine working with a better group of colleagues than our HFC math department,” he said. “Everyone who works here works with the best interests of students in mind. We may not always agree on how to do what's best for students, but we keep trying.”

“Scott Barnett has been a dedicated leader both inside the classroom and in College service for more than 20 years,” said Janice Gilliland, Dean of the HFC School of Science, Technology, Engineering, and Mathematics (STEM). “I was happy to support the application that Scott’s colleagues prepared. Scott provides outstanding leadership in the math department, which serves HFC students in their path to success.”