Notice: This article is more than one year old and is part of the Henry Ford College news archive. Information in the article may be outdated. For the most current news and information about Henry Ford College, please visit hfcc.edu/news, or contact communications@hfcc.edu.
Release Date:
Monday, October 18, 2021 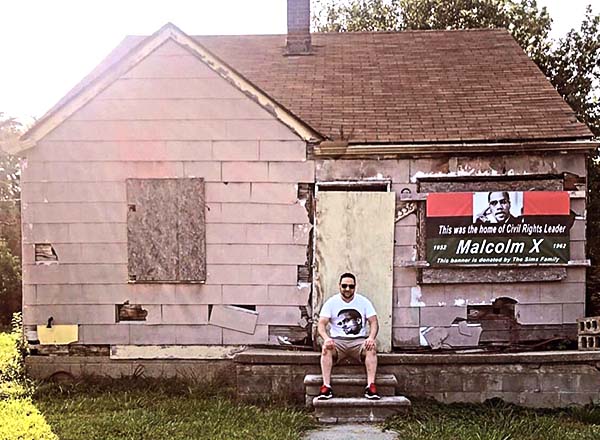 HFC instructor Dr. Tareq A. Ramadan sits on the porch of the house where Civil Rights icon Malcom X once lived. Ramadan recent was awarded a grant to renovate the house and turn it into a museum.

What came as no surprise to many that the fire-damanged house on 4336 Williams Street in Inkster with its gutted rooms and boarded-up windows was almost torn down by the city.

What came as a big surprise to many is that Malcolm X, a world-renowned figure in the Civil Rights Movement during the 1960s, lived in this house from 1952 to 1953. It was owned by Wilfred Little, Malcolm X’s brother, and his wife Ruth.

WHDAB - We Hope, Dream, And Believe

For 13 years, Aaron Sims, executive director of the non-profit organization Project: We Hope, Dream, and Believe (WHDAB) in Dearborn Heights, pleaded with the Inkster City Council, actively campaigning to prevent the house from being demolished. Earlier this year, Sims was able to secure the home.

HFC anthropology instructor Dr. Tareq A. Ramadan wrote a grant proposal, working closely with Sims. Their efforts have generated attention from the media in recent months.

“Aaron and I spoke about applying for a grant. I knew how to write grant proposals. Grants have funded some of my own research projects in the past. I went back and forth with Aaron, collecting data, then I wrote an extensive grant proposal to renovate, preserve, and transform the house into a museum. I submitted it in January 2021, and we were approved months later,” said Ramadan.

In July, they were awarded $380,850 in grant funds. Not only will they transform the house into a museum centering on Malcolm X’s life, they also registered it in the National Register of Historic Places. In late September, the State Historical Preservation Office Review Board unanimously approved the nomination – a critical step toward the home ultimately being listed in the NRHP.

“This is a huge step. We were elated. We weren’t sure what the outcome would be. It’s surreal. This is a major step in trying to preserve this home, which is absolutely deserving of attention,” said Ramadan. “Construction and renovation of this home will begin in the spring. We’ll be maintaining the house in the meantime and conducting more research. We’ll also collect oral history of the home in relation to the rest of the neighborhood and compile as much information about the area, historically, as possible.”

This renovation and preservation project is supported through an African American Civil Rights Grant for $380,850 which was provided by the Historic Preservation Fund as administered by the National Park Service (NPS), Department of Interior.

WHDAB’s overall goal is to make the house resemble its appearance in the 1950s, including period furnishings and decor. It will also contain a library and reading room.

“We’re looking to find photos of Malcolm X from this time. Wilfred Little was a pivotal figure in Malcolm X’s life and an important figure in the Nation of Islam in his own right. He allowed Malcolm X to live with him in this home after he was released from prison,” explained Ramadan.

WHDAB also purchased two lots next door to the house and a third across the street, where they plan to build a community center and a job training/youth tutorial center. In the spring of 2022, Ramadan will coordinate a joint archaeological excavation project between WHDAB and the Wayne State University Department of Anthropology to survey and excavate areas around the house. The goal is to have everything completed and open to the public by 2023.

“Aaron and his friend and colleague Dawon Lynn found the house, identified it, and saved it,” said Ramadan.

A Dearborn native and the second of three siblings, Ramadan followed WHDAB on Facebook. A graduate of what is now Taylor High School, Ramadan is a three-time alumnus of Wayne State. He has taught at Wayne State since 2007 and at HFC since 2017.

“I like the intimate learning environment at HFC,” he said. “I like the sense of community; that’s what really drew me in. I really enjoy teaching at the College.”

“I recall going to the library and trying to find out as much as I could about Malcolm X. When I learned he lived in Inkster at one point – only five miles from where I grew up and currently live – I felt compelled to find a way to join this project,” said Ramadan, who first contacted Sims in 2018 about his desire to get involved.

Initially, like many others, Ramadan was captivated by Malcolm X's oratory skills and became intrigued by his Michigan upbringing, as well as the fact he was self-educated and in a state of perpetual learning throughout his life.

“His willingness to boldly confront the social injustices – often the byproduct of systemic racism – during the most visible phase of the Civil Rights era in the 1950s and 1960s was of profound interest to me,” said Ramadan. “His own personal, philosophical, and ideological transformations – particularly in his final years – in some ways, were a corollary of the rapidly-changing social and political landscape of the 1960s.”

“The home itself represents a transformational moment”

In the 12th chapter of The Autobiography of Malcolm X, co-written with Alex Haley (author of Roots: The Saga of An American Family), Malcolm X wrote about living with his brother Wilfred in Detroit. It was actually Inkster.

“Detroit was renowned with a population of 1.7 million,” said Ramadan. “They probably placed the chapter’s setting in Detroit because of its universal appeal as a major city. Few readers of the autobiography would have heard of Inkster. It was only a village at the time.”

Sims, who served as the president of the NAACP for Western Wayne County, was mowing lawns in Inkster with Lynn when they learned of Malcolm X’s Inkster ties. They eventually found the address of the Inkster house and went to see if it was still there. It was, but it had been badly damaged in a fire.

“I was determined to get the house,” said Sims. “Dawon and I used every avenue we could because the house was on the demolition list. After years of fighting, we finally saved the house.”

“This house is profoundly significant because it’s where Malcolm Little became Malcolm X,” said Ramadan. “The home itself represents a transformational moment in his personal life. It’s the first time he practices his newly-found faith with his family. The genesis of his work, emergence, and rise as a public figure begins at this home in Inkster. This home is unlike many others.”

Born Malcolm Little on May 19, 1925 in Omaha, NB, Malcolm X was the fourth of seven children. After being harassed by the Ku Klux Klan, his family moved to Lansing when he was very young. Malcolm X attended Mason High School but dropped out before graduating after being told by a teacher that his desire to attend law school was unrealistic due to the color of his skin.

“Malcolm X was a transformational figure in the 20th century who was pivotal in changing the discourse on civil rights, social justice, and social inequities. He didn’t shy away from looking at systemic issues from a racial vantage point. He articulated his views front and center and brought them to the mainstream in many ways, especially when civil rights leaders at the time were less likely to frame the many dimensions of racism in such a vocal way. It made Malcom X controversial, obviously. Some of his views continue to be discussed and critiqued,” explained Ramadan.

After living in Flint for a short period of time, Malcolm X moved to Harlem in 1943. There, he engaged in gambling, racketeering, drugs, robbery, and pimping. In 1945, Malcolm X moved to Boston, where he continued his habits, stealing from wealthy Caucasian families. In 1946, he was arrested and served six years in prison for larceny and breaking and entering. Upon his release in 1952, he moved to Inkster.

Nation of Islam and assassination

“Malcolm X actually tried to build a Nation of Islam temple in Inkster. It didn’t come to fruition,” said Ramadan. “His charisma and his ability to recruit people was noticed, though. He was later dispatched to the East Coast to build up temple membership in major cities.”

Malcolm X proposed to Detroit native Betty Sanders, whom he met in 1955 after one of his speeches, over the phone while in Detroit in 1958. They got married two days later and would have six daughters together. Their twins, Malikah and Malaak, were born in 1965 after Malcolm X was assassinated.

“Malcolm X launched his career in Inkster. That’s where it all begins. He acknowledged his life there and mentions Inkster in one of the last speeches he gave at the Ford Auditorium in Detroit on Feb. 14, 1965. This was a week before he was assassinated,” said Ramadan. “This is a good summation of why we think the home is really important. It’s a succinct assessment of the home’s significance and its place in history. His experiences in Inkster had a profound impact on his trajectory as a public figure and civil rights leader.”

HFC anthropology instructor Tareq Ramadan provides a brief video tour of the fire-damaged interior of the former Malcolm X residence in Inkster. He tours the home with Aaron Sims, executive director of We Hope, Dream, and Believe.