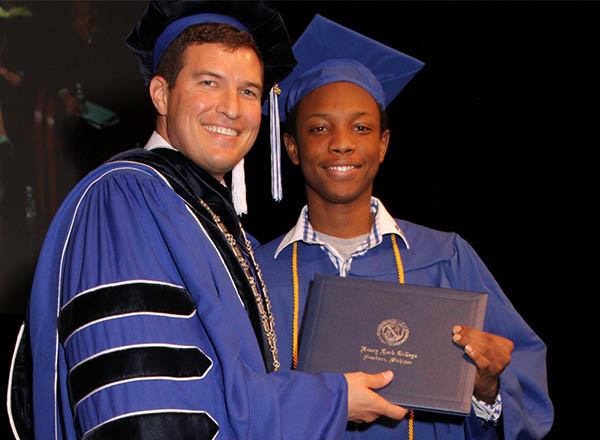 When HFC alumnus Ismaila Ba first interviewed with information tech giant Amazon in 2018, he was able to answer technical questions without hesitation due to the education he received in the CIS-IA (Cybersecurity) program at Henry Ford College.

“I have done a lot of hands-on work at HFC that reflect real world jobs,” said Ba, of Detroit.

In mid-August, Ba began a new position at Amazon as a security engineer. Previously, he worked as an IT support technician and was later promoted to an IT support engineer at Amazon. His new position is more a transfer than a promotion, according to Ba.

Desire to defend against cybersecurity attacks

In his new position, Ba’s duties include:

“The last few years have been very tough. There have been a lot of cybersecurity attacks against government agencies and private companies, which have resulted in billions of dollars of loss. I saw that I could be one of the people who’s able to reduce these losses. Additionally, I’ve watched a lot of movies that involve hacking and technologies and I thought, ‘That it is a cool thing to do for a living.’ And like that old proverb said, ‘Find a job that you love, and you will never work again.’ That is my inspiration,” said Ba.

Currently, Ba works from home. At the end of the 2021, once he graduates from Eastern Michigan University, he plans to relocate to Arlington, VA, which is home to Amazon HQ2, an expansion of the company’s world headquarters in Seattle.

“The most challenging part is working from home. I am a people person. I like to interact with people. By working from home, I do not have that interaction and, mentally, it is hard,” said Ba. “I am looking forward to relocating to the second headquarters building of Amazon in Virginia by the end of the year.”

HFC was the perfect fit for Ba

Born in Senegal, Ba is the eldest of eight children. He graduated from Dakar Modern High School in Senegal in 2015. After graduating from high school, he immigrated to the United States in 2016 and enrolled at HFC. He spoke about why he decided to continue his education at the College.

“When I started at HFC, I didn’t have a car, so its location was perfect for me. Also, I was only working at McDonald’s, which is not enough to pay for tuition at most colleges. With financial aid and scholarships at HFC, I was able to make ends meet,” he explained. “My other reasons are its ability to develop good leaders. I knew people who graduated from HFC and now are very successful. Also, HFC’s class size is very small compared to other colleges. That helped me build relationships with my classmates and teachers, which helped me succeed not only in school, but also at my job at Amazon.”

“I have met people from all around the world at HFC,” he said. “That made me learn and be aware of other people’s cultures, their lives, and their realities.”

“HFC gave me all the necessary tools I needed to go to EMU,” said Ba. “I was able to transfer most of my credits to EMU. That demonstrates what a quality higher education institution HFC is.”

Finding a mentor in Marrci Conner

“Marcci Conner is a one of a kind of teacher,” he said. “On top of teaching me the course material, she made sure to show me what the real world is like. During a class project, she made sure I completed my assignment and did my report just like I would in a real life work setting. Also, she would make me do presentations, which I was never comfortable with because English is not my primary language [he speaks fluent Fulani, French, and Wolof]. She would even invite other classes and teachers to the presentation to simulate a real life project presentation. Additionally, she would hold résumé and job interview workshops. She still provides her alumni with advice regarding our educational and professional lives. She also shares with us any events about cybersecurity professional organizations and extends invitations to us, so we can interact and network with the people who are already in the field.”

“Ismaila has always been incredibly passionate about cybersecurity,” she said. “I remember when he first started working at Amazon on the help desk, I suggested to him to start meeting the other IT/cyber professionals in the cybersecurity area and figure out how he can join their department. When you already work for a company, you have an insider advantage!”

Ba’s ultimate career goal is to run his own security company.

“Don’t get me wrong: I love working at Amazon. I think it is the greatest tech company out there. However, I would like to have something for myself, and it is starting to take shape inside my head,” he said. “HFC’s cybersecurity program is a good way to start in the security industry. There are hands-on labs that simulate real life work assignments, and HFC’s Career Services Office can prepare you to be successful in your career.”