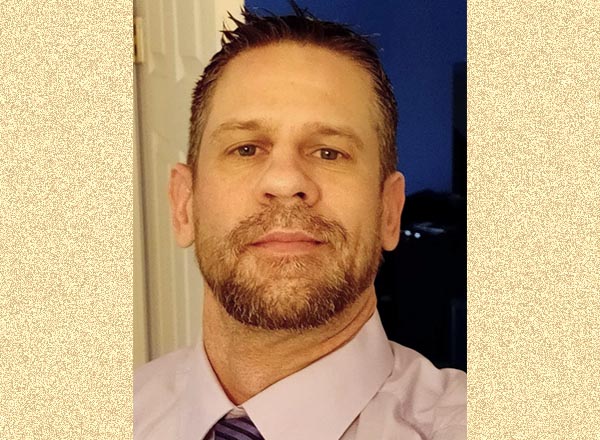 “I started to cry,” confessed Schaefer, who lives with his son, Zandyn, 8, in Brownstown Township. “I could not believe how far I had come.”

Schaefer spoke candidly about his struggles with addiction, as well as serving time in prison. He has been clean and sober for five years and has become a social worker.

A 1996 alumnus of Anchor Bay High School in New Baltimore, Schaefer attended HFC in 2006. He graduated from HFC in 2019, earning his associate degree in liberal arts. He transferred to Madonna, from where he recently graduated with high honors, earning his bachelor’s degree in social work.

“I first came to HFC to get into the radiographer program. I found out that I could not have felonies on my record and work in a hospital until the felonies were at least 10 years old. That is when I decided to become a social worker, where my past could help others not make the same mistakes I had made,” he said.

Since 2020, Schaefer works at Community & Home Supports, Inc., a Detroit-based non-profit organization that networks with other agencies to house the homeless and assist people who are at imminent risk of becoming homeless.

“My work ethic and empathetic ear for the population we serve got me hired. I have been homeless, so it is a real privilege to help these individuals get the resources needed to be successfully housed,” said Schaefer.

He plans to continue his education at Madonna, beginning graduate work in addiction studies and becoming a fully licensed social worker. One of his career aspirations is de-stigmatizing addiction.

“I suffered from substance abuse disorder for 20 years of my life,” he said. “I was at a real low and would steal from people. When I got sober, I wanted to become part of the solution instead of the problem and help people meet their basic needs, so they can feel empowered to live self-determined lives. This is what social workers strive for on a daily basis.”

Not taking no for an answer

Schaefer’s classroom performance and his life experiences that have affected his work at CHS earned him the distinction of becoming Madonna's Student of the Year. Matthew Tommelein, his supervisor at CHS, promoted his accomplishments to the Madonna faculty.

“I appreciated Dave's willingness not to take no for an answer when presented with the reality of the pandemic hindering the agency's ability to provide in-person services to Detroit's homeless population. Dave said, ‘I can help,’ and he did, diving into the field, providing critical face-to-face assessments and coordination for the homeless clientele. Dave has a knack for communicating and building rapport with homeless individuals. We appreciated his grit, energy, and style – so we hired him!” said Tommelein, CHS Housing Navigation Manager.

Schaefer was also recognized and honored by the National Association of Social Workers during an online event. He was given an honor cord to wear at commencement.

“I chose to come to Madonna because I wanted the small classrooms like HFC, so I could get to know my professors. I did not want to get lost in a classroom of hundreds,” said Schaefer. “If I can turn my life around, anyone who has the willingness to change can too – one day at a time.”