HFC alumnus Colter honored by the International Society of Arboriculture 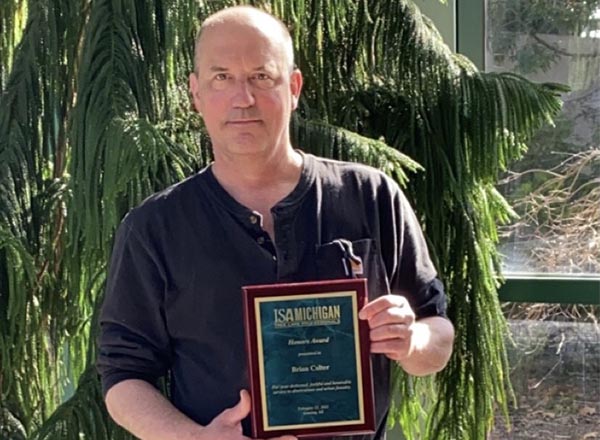 The Michigan chapter of the International Society of Arboriculture honored HFC alumnus Brian Colter, urban forester for the City of Grosse Pointe Park, in February with the 2020 Honors Award.

Joe Aikens, president of the Arboriculture Society of Michigan Foundation nominated Colter for this award, which recognizes one certified arborist per year who exemplifies success in managing forests, educating the public, and implementing unique programming. Colter was given this award for his “dedicated, faithful, and honorable service to arboriculture and urban forestry.”

“I wasn’t expecting this award, but it’s much appreciated,” said Colter, of Novi. “I always enjoyed the outdoors and working with my hands. Being a certified arborist, I am able to apply my education and knowledge.”

A graduate of Edsel Ford High School in Dearborn, Colter attended HFC (then Henry Ford Community College), where his parents, Lorne and Doris Colter, were members of the English faculty for more than 20 years. In fact, his father donated 100 hand-polished stones to the College.

“Our family had a lot of friends who taught there, whom I respected, and knew would be great professors,” he said. “My education there was bar none. The professors taught the classes, not teaching assistants.”

When he graduated from EFHS, Colter moved to Alaska. There, he worked as a field biologist for five years for the U.S. Fish and Wildlife Service during the summers while taking classes at the College. He fondly recalled living in a tent on the Arctic North Slope during his first summer in Alaska.

“It was the best time of my life,” said Colter. “Essentially, I was getting paid to live in a tent on the Arctic North Slope to study migratory birds.”

After earning his associate degree in liberal arts from HFC, Colter transferred to the University of Michigan in Ann Arbor, where he earned his bachelor’s degree in general studies. He completed graduate-level coursework in urban forestry from Michigan State University. Colter is also a certified arborist through the ISA.

“The College gave me a solid base, which my career was built on,” he said.

In 1994, he was hired as Grosse Pointe Park’s city forester. Since 2017, he also has been the city forester for the City of Grosse Pointe. His duties include overseeing more than 10,000 city-owned trees, including planting, removal, trimming, plant health care, public education, and public events. Some highlights of his career include:

“Armed with his commitment to environmental sustainability, his educational background, and his inherent love of the natural world, Brian built a foundation of arboricultural advancement and citizen outreach in the Grosse Pointes and across the state of Michigan,” Kyle said in a statement. “During his tenure… the city received 27 annual designations of Tree City USA through the Arbor Day Foundation and another 13 Growth Awards, making the city one of only six Sterling Communities in Michigan.”