Heart of the Hawks: Frontliner Mark Robey excels in college after 40-year hiatus 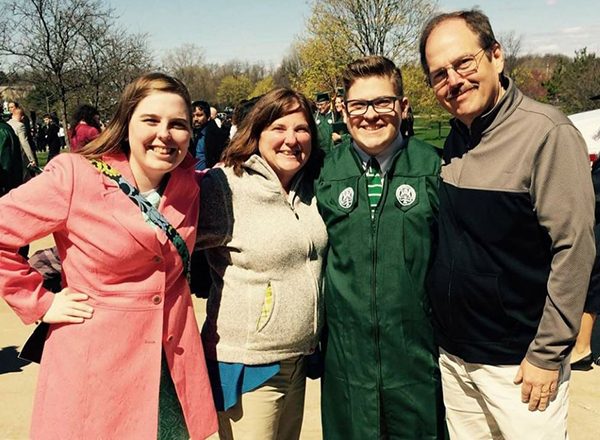 Mark Robey, right, with his wife Ellen and children Mary and Averett, 2015.

Mark Robey’s inspiration to undertake a college education after working in retail for 40 years was the encouragement of those closest to him: his childen, Mary and Averett – both of whom have college degrees.

What gave Robey – who lives in Dearborn Heights with Ellen, his wife of 35 years – even more impetus to pursue higher education was getting laid off at Pet Supplies Plus after working in management positions for 15 years. Around that time, he learned about Futures for Frontliners, a Michigan scholarship program for state residents without college degrees who worked in essential industries during the COVID-19 shutdown in spring 2020. This scholarship provides frontline workers with tuition-free access to a community college to pursue an associate degree or a skills certificate.

“I was thinking about getting out of retail, which has become quite a dogfight. During the early part of the pandemic, Governor Gretchen Whitmer introduced the Futures for Frontliners scholarship. I applied, and when Pet Supplies Plus let me go, it was like the universe was confirming I should go for the career pivot,” said Robey. “Both my kids knew I had been talking about getting out of retail. They initially sent me the information on the Frontliners program. As soon as they did, I got right after it, looking into community colleges.”

“I fell in love with HFC”

After doing his due diligence researching several community colleges in the Metro Detroit area, including HFC, Robey decided HFC was the right fit for him.

“I fell in love with HFC, as the communication and outreach was tremendous. My experience with the other colleges sealed the deal to attend HFC. Top to bottom, HFC people have great hearts,” said Robey.

Currently, Robey – a member of the Henry Ford II Honors Program – is working toward his associate degree in business administration. His expected graduation date is 2023. He hopes to transfer to Eastern Michigan University (EMU) in Ypsilanti – where his children graduated – through HFC’s articulation agreement with EMU. There, he plans to study technology management. Previously, Robey completed some coursework at the Georgia Institute of Technology (Georgia Tech). He also has a private pilot’s license.

Born in Washington, D.C., Robey’s father Melvin was in the Navy (and a veteran of the Korean War and the Vietnam War). His family moved around a lot. Robey – the eldest of two – graduated from Baylor School in Chattanooga, TN in 1979. When he attended Baylor, it was an all-boys military school.

Upon graduation from Baylor, Robey attended Georgia Tech. During his first semester, his father had a stroke. He had to go to work to support the family. He was working, attending college, and helping out with his father.

“The vice-president at the company soon promoted me to team leader and store development,” he said. “Before I knew it, I was barely 20 years old and my salary at Time-Out Family Amusement Centers had reached $20,000 in 1980 dollars. Needless to say, my schoolwork suffered and my dad was sick. I was too young and had too much pressure on me. A career found me.”

Robey spent the next four decades in retail, eventually becoming the vice president of the International Trade Association for Instructors and Pro Shop Operators, while raising a family. He published articles in several industry magazines and co-authored the technical training manuals used by the association.

Robey – who recently got a part-time job at ROUSH Performance in Allen Park – has maintained a 3.9 GPA throughout his time at the College. He spoke about the challenges of taking classes as a non-traditional student.

“It’s about being committed to change; sometimes easy is comfortable,” he said. “Change requires perseverance and determination. I respect that, because life has challenges. Only when you are a kid, life can seem easy. Once you have responsibilities, things get complicated. That's one of the great things about attending HFC: Genuine people genuinely care, which doesn’t just help you, but inspires you.”

Robey continued: “Top to bottom, the faculty and staff at the College cares about the students. I have never had a communication where someone was not trying to help. If they don't know an answer, they will not just steer you in the right direction, they will follow that path with you. I think that starts with President Russ Kavalhuna and the HFC Board of Trustees, and it flows through the entire faculty and staff. They’re all inspirational, and it makes me want to give back as good as I get. I want to honor and mirror the heart of the Hawks – that commitment to care.”