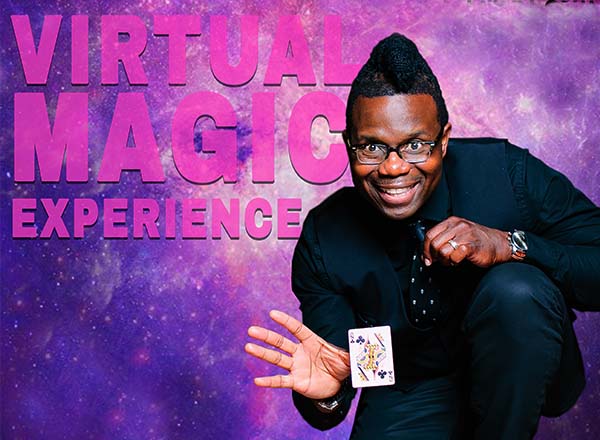 One of the most sought-after magicians, Ran’D Shine will perform his “Stream of Illusion” magic show at HFC on Thursday, Nov. 4, from 4:00 to 5:00 p.m. This virtual event is sponsored by the HFC Student Council.

Part of the show is interactive. Some of the participants will need to have the following items:

You may choose to have these items handy if you wish.

Shine will spend the last 20 minutes of his show teaching basic card tricks to the participants.

“It’s still magic, even if you know how it’s done,” said Shine.

A native of Philadelphia, Shine has been performing magic for more than a decade, wowing many people, including former President Barack Obama. He performed at Obama’s first inauguration in 2009.

Shine has performed on college campuses all across the nation and military bases in Japan, Korea, and Guam. He has performed in 25 countries around the globe. He also is a fixture at numerous hospital wards, entertaining children who suffer from illnesses.

Shine’s talents have been on display at Hollywood’s Magic Castle and Monday Night Magic, which is New York City’s long-running Off-Broadway magic show. He has appeared in The Art of Magic documentary and various magic specials on network TV, including Penn & Teller: Fool Us.

This free virtual event will be live-streamed.

For questions or more information about this event, contact Kay Peter at knpeter@hawkmail.hfcc.edu.