Get to know HFC: Rick Hatala and Hannah Hatala 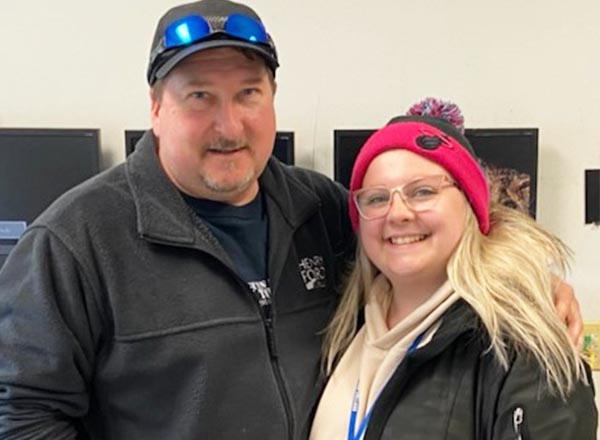 This story is one in a series about HFC employees. If you would like to nominate yourself or a colleague to be featured in this series, email communications@hfcc.edu with the person's name and a short statement about why you are nominating them.

Not only are Rick Hatala and his daughter Hannah both HFC alumni, they currently work together in the College’s ITS department.

“I love seeing her learn and grow every day,” said Rick, of Woodhaven, who has worked at the College for 25 years. “It’s wonderful.”

“I love to work with my father just because we can brainstorm ways to make things better for the students,” said Hannah, also of Woodhaven, who has worked full-time at the College for six months. “I think the best part of working together is we can merge our ideas. We are always open to hear what each other might have to say.”

Added Rick: “I enjoy working with Hannah, teaching her things as we go and seeing her grow as a person and a technician. Solving an issue together or completing a project is very special.”

Rick, an alumnus of Kennedy High School in Taylor, earned his associate degree in computer science from HFC. Hannah, an alumna of Woodhaven High School, earned her associate degree in cybersecurity from HFC and is currently pursuing her bachelor’s degree in information assurance and cyber-defense at Eastern Michigan University in Ypsilanti. Both of them report to Joe Zitnik, Director, Network and IT Infrastructure.

“I came to HFC twice. The first time, I was just out of high school. The second time, I was in my late 20s. I left HFC the first time to work at two car dealerships. Then I was laid off, so I went back to school. HFC was close to home, had affordable tuition, and I had heard very good things about the College from friends and family.”

“I made the decision to attend HFC from not only my dad working here but because I heard such great things about it. I had planned to go away for college, but decided this was the route for me,” she said. “I thought the campus was very pretty, and I felt safe here. I was also familiar with the people because my dad worked here for 20 years at that time.”

Hannah worked as a co-op student at HFC for nearly two years, as well as Canton Computers in Livonia for several months before accepting a full-time position at the College.

“I really loved the people I worked with at HFC and how we all got along and could work together as a team,” she said.

Computers run in the family

“I learned from him and got my knack for computers, thanks to him,” said Rick, who has passed along the family affinity for technology.

“My dad inspired me to go into computers because he’s been working at the College since I was a baby,” said Hannah. “He used to bring home old computers I could play with. Then I got older and realized that this was something I wanted to do.”

The only challenge Hannah finds when working with her father is they’re too much alike, and their personalities sometimes clash.

“The apple doesn’t fall too far from the tree,” she said, laughing. “Sometimes it’s like working with two of the same people.”

Rick, however, hasn’t had any challenges working with his daughter.

“Working with my daughter just gives me more time to be around her as she grows as a person and her career moves forward as well,” he said. “HFC has been a second home to me over the years, and many of the people here are much like my family. It has been a wonderful place to work and grow. This is one of the reasons I am so happy my daughter was able to start her career here.”