Get to Know HFC: Raed Abukhader 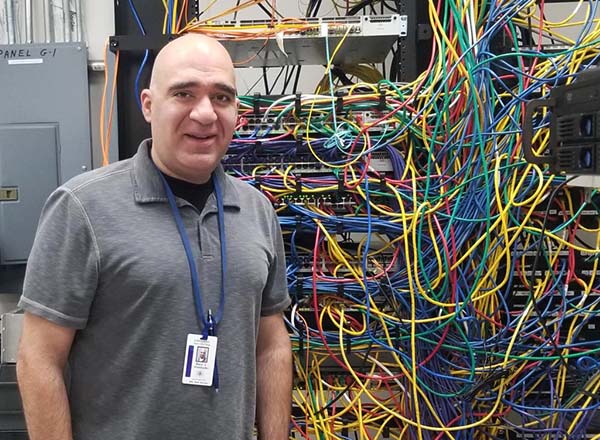 HFC Computer Tech Associate Raed Abukhader remains undaunted (though apparently concerned...) as he works with a spaghetti mess of wires and electronics.

If your computer is malfunctioning or if your internet isn’t working, HFC Computer Tech Associate Raed Abukhader is the person to call.

The two-time HFC alumnus will do everything in his power to fix what is not working, and make sure you are set up for success. For the last 17 years at HFC, Abukhader has worked hard to make sure HFC employees’ computers are running smoothly.

“I work with a fantastic team that is more like family than coworkers. I also enjoy problem-solving and helping the Information Technology Services team and users find solutions to make their work more efficient and productive,” said Abukhader, of Farmington Hills.

He reports to Joe Zitnik, HFC Director of IT Infrastructure.

“Raed is conscientious and hard-working,” said Zitnik. “He has always gone the extra mile to make sure the people he deals with are satisfied with the solutions he has provided for them. He cares about his work and the people he works with, and that makes him a wonderful person to have as part of our team.”

A self-proclaimed foodie, Abukhader went to Amarillo, TX over a long weekend this summer to compete in Man v. Food, which airs on the Travel Channel. The challenge was to eat a 72 oz. steak, a side salad, a side of breaded shrimp, a dinner roll, and a baked potato.

Keep in mind, the average steak you might order in a restaurant tops out at 14-16 oz.

“Not surprisingly, I failed,” he confessed. “Somehow, I did manage to eat around 48 oz. of the steak (3 pounds), in addition to the shrimp, salad, and dinner roll.” He didn't say much about how he felt afterward. Or, how long he waited until his next meal.

Abukhader is also a CompTIA A+ Certified Technician. He plans to continue his education at Eastern Michigan University.

From co-op to career at HFC

“HFC was a close commute and incredibly affordable, and I had doubts about what I wanted to do for a living,” he said. “I originally came to HFC with a major, which I then changed to another major, and then I changed it yet again -- all within the first two semesters. A friend suggested taking computer classes, so I met with an advisor, and I was set on the CIS path. The coursework came naturally to me. Once I began co-op work, I found the duties and assignments both fun and satisfying when solving problems. I was sold.”

Abukhader continued: “The CIS program at HFC in its original format focused a lot on software programming and some web development. I tried to find jobs related to web development but lacked the experience. I paid a visit to the College’s Job Placement offices. They recommended that I apply to be a co-op with what was then the Data and Voice Department. I was accepted, but I needed to register for some courses to be eligible, so I took the hands-on computer hardware class. I got some good training and learned valuable skills in that position. I decided I wanted to pursue a career as a technician. The rest is history.”

“I love that I can continue to learn,” he said. “The learning never stops, so my mind is stimulated, and I’m always engaged and interested. Also, the work I do doesn’t get stale. I love the work that I do. It feels more like a hobby than a daily set of tasks.”