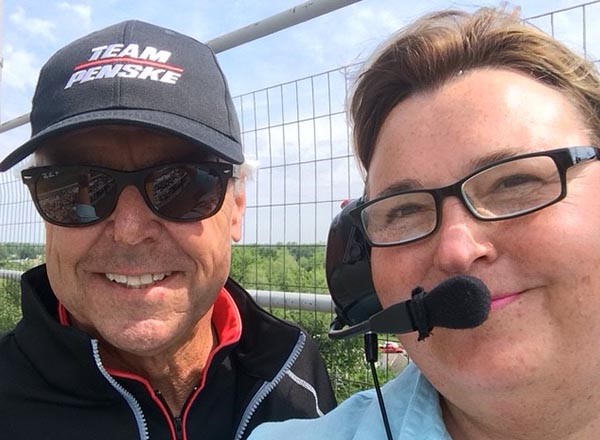 When HFC alumna Linda Conti was 13, her late father Nick Pultorak – a flat track motorcycle racer – made her a deal: He would buy her a Volkswagen Type 3 Fastback when she turned 16, if she first learned how to rebuild its engine. So Conti got to work immediately.

“If I wanted to drive, I had to rebuild that engine,” said Conti, a Detroit native who lives outside Indianapolis with her husband David and their son, Lucca, 17.

Along with watching the Indianapolis 500 on television and seeing her father’s racing exploits, learning how to rebuild the VW’s engine set her career path in motorsports.

After graduating from Bishop Borgess High School in Redford in 1982, Conti attended Wayne State University, where she studied finance. She also attended HFC (then Henry Ford Community College), where she enrolled in the Automotive Technology program.

“I was the only woman in the class. The men saw me as sort of a curiosity. When they saw how skilled I was with the tools, we were equals,” said Conti. “That automotive program was such a great experience. I learned a lot, it really helped me in my career.”

The hands-on automotive classes at the College led to Conti earning an internship at General Motors, working on experimental engines. She turned that internship into an opportunity in the racing world. She became the first female mechanic hired by the Skip Barber Pro Series, spending one year based at Lime Rock Park, a car racing track in Salisbury, CT.

Throughout her 35 years in motorsports, Conti rose through the ranks from Formula Super Vee to Atlantic Championship Series. She aspired to work for Penske Racing, founded by entrepreneur, businessman, and race car driver Roger Penske.

One of Conti’s career highlights is becoming the first female team manager in Indy 500 history in 1999 on the team she co-owned with her husband. Thanks to the Contis, race car driver Robby McGehee made his rookie debut in the INDYCAR Series that year, where he finished fifth.

These days, Conti is a respected driver spotter for Team Penske. She can be seen sitting high above Turn 3 at the Indianapolis Motor Speedway, having worked alongside McGehee, Mears, and other former race car drivers including Detroit native Robbie Buhl, Conor Daly, and James Davison, among several others.

“I’m one of three people who talks to the drivers,” said Conti. “We give them instructions about traffic conditions to help them have a safe race.”

In addition to being a spotter, Conti has also been a financial advisor for nearly 27 years. She joined the Indianapolis office of investment bank Merrill Lynch & Co. in 1994. She works for investment firm Acorn Advisors in Carmel, IN. At Acorn, she is a senior vice-president/wealth advisor, who manages money for many people in the racing industry.

By her own admission, Conti wasn’t trying to be a female trailblazer in the racing world, given all the firsts she’s accomplished.

“That wasn’t what I aimed to do,” she admitted. “If I did inspire other women, I’m thrilled.”

All she wanted to do was pursue her passion, which she did.

“I’ve gotten to travel all over the world and met some very famous people – all through racing,” said Conti. “If I hadn’t gone to HFC, none of that would’ve happened. The College gave me experience and confidence to work for GM and, from there, racing.”