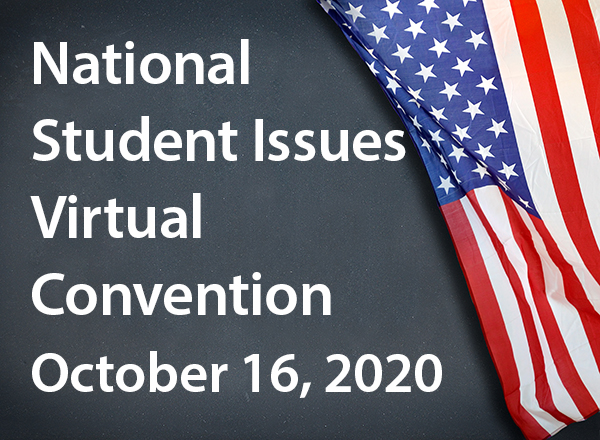 More than 250 students representing 15 colleges and universities – including HFC, which is serving as one of the two coordinating institutions – from eight states will participate online via Zoom in the National Student Issues Virtual Convention on Friday, Oct. 16, from 1:00 to 4:00 p.m. EST (noon to 3:00 p.m. CST).

Participating students will nominate, discuss, and vote to select the top five issues that are important to them in the upcoming election on Tuesday, Nov. 3. Following the vote, several congressional candidates and local representatives from the presidential campaigns of President Donald Trump and former Vice President Joe Biden will respond with comments on their positions on the five issues.

“The youth vote is likely to have a significant impact on the outcome of many races in 2020,” said Dr. Anthony D. Perry, HFC political science professor and convention coordinator.

According to Dick Simpson, a former Chicago alderman and a professor of political science at the University of Illinois at Chicago – which is serving as the convention’s coordinating institution with HFC – he expects the top five issues also will strongly influence students and young voters when they cast ballots in Congressional and other down-ballot races.

“The top five issues chosen at the convention coupled with the candidates’ positions on these issues will undoubtedly determine how the students vote in November," said Simpson.

According to Perry, research from the Pew Research Center in Washington, D.C. shows that Millennials (born 1981-1996) and Generation Z (born after 1996) now make up 37 percent of the nation's eligible voters. According to the Brookings Institution in Washington D.C., this is roughly the same share of the electorate that Baby Boomers and pre-Boomers make up.

A rise in the number of eligible young voters is one factor but actual voting wins elections and usually affects public policies, stated Simpson. This indicator also has been increasing in the last few elections. College student voting rates in the 2018 midterm elections doubled compared to the 2014 midterms, marking a watershed election for student voter turnout, per a report last year from the Tufts University Institute for Democracy & Higher Education. Tufts analyzed the voting patterns of more than 10 million college students on more than 1,000 campuses. In 2018, the Average Institutional Voting Rate among campuses in the study was 39.1 percent, nearly 20 percentage points higher than 2014’s average turnout rate of 19.7 percent. A survey published this year in late August by the Knight Foundation and College Pulse found that 71 percent of 4,000 full-time college students said they are “absolutely certain” they will vote this year.

“A voting rate of 71 percent for 10 million college students would be astounding but unlikely,” Simpson said. “But a few points above 40 percent could have a major impact on the Presidential election and other federal races.”

Perry and Simpson are coordinators of and spokespersons for the National Student Issues Convention. They are and will be available for in-person, telephone, or Zoom interviews before and immediately after the convention.

Interviews can be arranged by contacting Tom Gradel at 773-742-4996 or Thomasjgradel@earthlink.net.