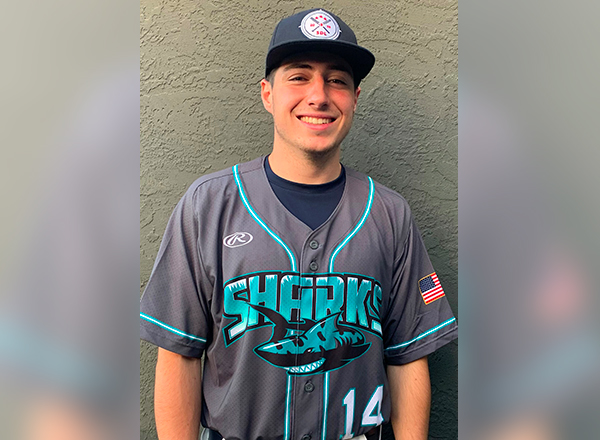 Garrett Gamble wanted to play college baseball, and found his opportunity at HFC.

“HFC provided me with the chance to get better at the game and gave me a shot at pursuing the dream,” said Gamble, of Taylor, a 2018 alumnus of Hudson Area High School, who played in the San Diego League, Southern California’s premier summer collegiate baseball league, this summer.

Then-Coach Tim Leighton recruited Gamble to play baseball for the Hawks, and the team is now coached by Michael Abney.

“I did not receive a scholarship, but was lucky enough to be able to sign a letter of intent,” said Gamble, who’s majoring in business management and expects to graduate next year.

“The diversity at HFC is something that I think will benefit me more than anything else. Coming from a small town, I didn't see much diversity, and I know being around people of all backgrounds will only help me in the business world,” he said. “On the field, our spring break trip is always a lot of fun. Most of our bonding goes on during our week in Myrtle Beach. It's pretty hard not to bond with guys you're riding 14 hours on a bus with there and back and you all share the same goals and aspirations. Any time I'm at the baseball field with the group of guys at HFC, it’s going to be a fun, competitive environment.”

Playing the most competitive baseball of his life

Gamble had a great time playing baseball for two months this summer with the San Diego Sharks.

“Hands down, this was the most competitive baseball I have ever been a part of,” he said. “I played with and against many D1 baseball players. The experience of facing those guys is something that can only make me better as a player.”

One thing that made his experience different is playing in the midst of the global pandemic. For the most part, baseball is a unique sport for social distancing, with the exception of pitcher conversations and the proximity of the batter, catcher, and umpire. It’s usually played (and practiced) entirely outdoors.

“It was different in some ways, but at the end of the day, it was baseball as usual. We had to place our bags and anything we didn't need on the field outside of the dugout, and our temperatures were taken upon arrival at the field. Wearing a mask was not required, but many chose to do so. Umpires always had masks on and no fans were allowed into the stadium until toward the end of the season. On the field, everything was pretty much the same,” explained Gamble.

Gamble has aspirations to play Major League Baseball (MLB), as do many of his teammates.

“I was not aware of the work it takes to get to that level, but my coaches and many teammates have passed a lot of knowledge down, and my work ethic has really taken off this summer,” he said. “Overall, I want to be the best version of myself on the field and not leave anything behind. The goal is to play at the highest level I am capable of and to reach my full potential as a baseball player.”

After graduating from HFC, Gamble plans to continue his education and his baseball career at a four-year university.

“I hope with a lot more knowledge and a lot more hard work to be able to play beyond college,” he said. “If that doesn't work out, I'm sure you'll be able to find me coaching or doing something meaningful with the game of baseball, even if it’s not my main job.”