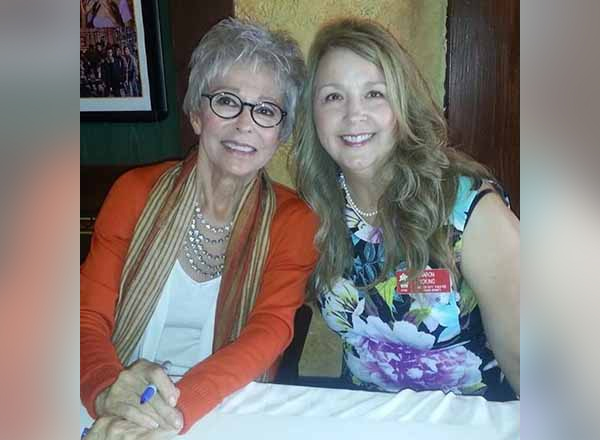 Oscar winner Rita Moreno of "West Side Story" and HFC Federal Program Manager Sharon Pearl Picking at the Redford Theatre in Detroit. Picking was recently elected as the first female president of the Motor City Theatre Organ Society – Redford Theatre Board of Directors.

In 56 years, the Motor City Theatre Organ Society (MCTOS) – Redford Theatre Board of Directors has never had a female president.

“I feel truly honored to serve as the first female president of MCTOS,” said Picking. “It’s a milestone for the organization and for me. I know that I serve due to the foundation that was built by many other dedicated women who have served the organization, as well as my female role models.”

Picking has been a member of MCTOS and ATOS since 2010. She’s volunteered at the Redford in a number of capacities, including working at the concession stand, being an usher at special events, and assisting at the autograph table during celebrity appearances.

It also has a deep personal meaning to her. During a screening of 1946's It’s a Wonderful Life, her husband Patrick got down on one knee and proposed to her on stage during the intermission.

“That event started a trend of many engagements and weddings at the theatre,” she said. “The Redford will always hold a very special place in my heart.”

The Redford – which opened Jan. 27, 1928 – is a historic landmark in Detroit. It was accepted into the National Register of Historic Places on Jan. 31, 1985. More than 100 theaters in Detroit contained pipe organs when originally built, but the Redford is the only neighborhood theatre with its original theater organ.

Current programming at the Redford runs an eclectic variety of bi-weekly movies that ranges from classic Hollywood – 1939’s The Wizard of Oz, 1942’s Casablanca, the films of Alfred Hitchcock – to blockbusters such as 1984’s Ghostbusters, as well as modern hits such as 2004’s Napoleon Dynamite. Many celebrities have appeared at the Redford, speaking about the movies they’re known for, including Tippi Hedren (1963’s The Birds) and Oscar winner Rita Moreno (1961’s West Side Story).

“My interest in classic films and history started at an early age as my father loved taking my brothers and me to the movies and historical places,” said Picking, who counts Casablanca, the Basil Rathbone Sherlock Holmes films, and 1955’s Guys and Dolls among her favorite movies. “As a result, I have always felt more at home in an old house or building than I do in any modern place. I am also very passionate about the city of Detroit and preserving its historical legacy for generations to come.”

Non-profits and historical venues have been hit hard by the pandemic, because much of their revenue is derived from movies, rentals, and special events – and the Redford is no exception. In fact, the majority of the Redford’s 2020 programming had to be canceled. Only recently has the Redford been able to reopen on a much smaller scale with less revenue (it’ll screen 1993’s The Nightmare Before Christmas on Friday, Nov. 20). However, maintenance and operational costs for a historic venue continue even when it is closed.

"My primary goal is sustainability of the theatre over the next year,” said Picking. “We want to continue to offer a unique movie-going experience complete with our Barton Organ and special programming in our lovely historic theatre. As an anchor in the community, we need to strengthen our ties and engagement in the old Redford neighborhood. It is also critical that we expand our resource base through grant writing and engagement in capital campaign projects to secure an endowment for the Redford moving forward.”

Picking has an above average familiarity with film and the film industry, and has even volunteered at the CineCon Classical Film Festival in Hollywood.

“Given my knowledge of film and my professional background, I believe I can make a positive contribution serving as president of MCTOS,” said Picking.