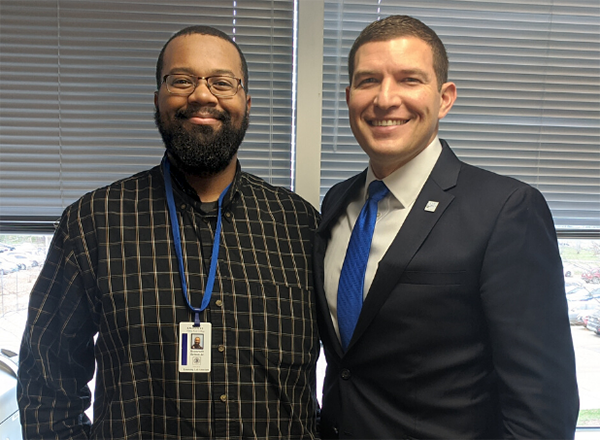 “We wanted to start off strong, and we knew the president would be a good guest. He's very passionate about student success, and that came across clearly in our interview . That episode set the tone for what we want the rest of the series to convey,” said Belton, who has a background in radio.

Originally, Belton planned to release one episode of Lab Sounds each month. When the pandemic changed campus operations, he and HFC Learning Lab coordinator Chardin Claybourne decided to release them all at once.

“Everyone has a story about what student success means to them, and our goal is to continue to be a platform for that,” said Belton.

Interview with the President

In the first installment of the podcast, which is nearly 15 minutes long, Belton interviewed Kavalhuna about his background and his goals as president of the College. Kavalhuna mentioned has a passion for public service, institutional leadership, and education. Kavalhuna spoke about how his late father, an immigrant, achieved the American dream by attending a community college.

“Education is the most effective way to invest in people to increase the prosperity of their own individual lives and society,” said Kavalhuna. “Education has made the difference in my life, and in my parents’ lives. It’s a real testament to my own existence.”

He spoke about student success. When students graduate from HFC, whether they transfer to a four-year educational institution, enter the workforce, or have learned a valuable new skill, that is a mark of success to Kavalhuna.

“If a student came to me and said, ‘You know what? I took four classes, and I was a better-educated person about X or Y’ – that’s a success,” said Kavalhuna.

Kavalhuna noted that the College has a “rock solid foundation of educators” who are committed to helping students attain higher education, especially since HFC is affordable and accessible.

“There is a real and definable benefit to higher education, and we’re committed to helping students accomplish that,” said Kavalhuna.

When Kavalhuna encounters students, he always tells them: “I’m glad you’re here. I’m proud you’re here. What can I do to help you be more successful?”

One of his roles as president is to be a cheerleader.

“The most important job I have is to be a cheerleader for the students, faculty, and staff here. The institution’s got an outstanding reputation for excellence in education. We have a reputation in the community as welcome and warm to an extraordinarily diverse group of students,” said Kavalhuna. “It’s a fun job.”

Listen to all episodes of Lab Sounds