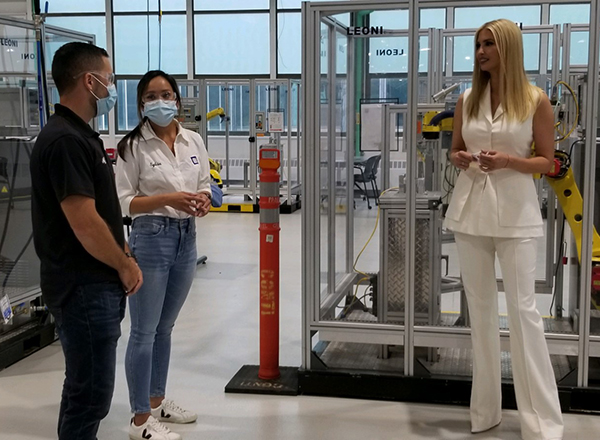 HFC students Jeff Thompson and Sylvia Tran were nervous, excited, grateful – a gamut of emotions – to be chosen to present a robotics demonstration to a group of dignitaries including:

Thompson and Tran were chosen from 300 apprentices to give a demonstration on Sept. 2 at GM’s Technical Learning University on the campus of GM’s Global Technical Center in Warren.

“This was very exciting. Very nerve-wracking, too,” said Thompson, of Shelby Township, with a laugh. “At first, we were shocked to learn we’d be the ones doing the presentation out of 300. It was an awesome feeling to do this.”

Thompson and Tran had only a day to work on their demonstration, where they programmed a robotic arm to unlock a latch on a cabinet, open the door, retrieve a part from a lower fixture, and place the part into the cabinet. From there, it closed the door and locked the latch. As it returned to its original position, Thompson and Tran used to the sound of the grippers (fixtures attached to the ends of the robotic arms) to mimic clapping.

In reality, there was no need to mimic any clapping. Trump applauded their efforts and talked to them at length about their career goals. The demonstration went off without a hitch, much to the relief and elation of Thompson and Tran. In fact, their demonstration was covered by the local media, including the Detroit Free Press and FOX 2.

“We didn’t have a lot of time to prepare,” said Tran, of Detroit. “We couldn’t even run through our program on the day of the demonstration, because classes were going on at TLU and the Secret Service had to vet the area. There was just way too much commotion. Everything happened so fast, it didn’t hit me until I saw the motorcade. That’s when I realized what a big deal it was.”

Prior to Trump’s arrival, Barra spoke to Thompson and Tran.

“She wanted to wish us luck. She made a great effort to speak to us and was very personable,” said Tran. “She was impressed with what we did.”

A pathway to a rewarding career

Trump pointed out that many people are not able to earn a college degree. An apprenticeship provides a pathway to a rewarding career without student debt.

“We don’t have to pay for this learning. It’s on-the-job training, and we have a job opportunity. You’re already hired, and you’re just furthering your career at that point,” said Thompson.

Thompson and Tran were on vastly different career tracks before becoming electrical apprentices at GM. In Thompson’s case, he graduated from Chippewa Valley High School in Clinton Township and earned his certification in fire science from Macomb Community College.

Thompson originally planned to become a firefighter, but his father, a 32-year GM veteran, helped him get a job at GM's Pontiac plant in 2008. For the past three years, he has been an electrical apprentice.

“I’ve always liked doing home projects,” he said. “The trades really interested me, because I like working with my hands.”

Tran, a Grand Ledge High School alumna, earned her bachelor’s degree in biology from Michigan State University. She was unsure what direction she wanted to go with her biology degree. Her father encouraged her to get a job at GM in its Lansing plant, where she assembled doors as she figured out what her next career step would be. The fact that GM would pay for her continuing education was attractive.

“It was a culture shock working in a plant,” said Tran, who’s been an electrical apprentice for three years. “But it was a good shock. I love working with my hands, something I had never done before.”

Since 2017, they’ve both taken trades classes at HFC to help them in their careers. They agree that HFC has given them a real advantage.

“Sitting in classes was never my cup of tea. However, the classes I took at HFC got me excited because they relate directly to the work I’m doing at GM and make my work easier to perform,” said Thompson. “Several of the TLU classes I took weren’t as difficult, because I understood the building blocks, thanks to my HFC classes. HFC helped me understand these concepts, paving the way for the TLU.”

“The classes at HFC pertain to what we do on the floor at GM,” she said. “I’ve encouraged our fellow apprentices to take classes at HFC to cover all the bases, especially the science behind everything. The College hits all the topics they need to know – it was very beneficial that way. The learning experience I got from HFC has really helped me when troubleshooting on the floor.”

HFC instructor Bert McAlister is proud of Thompson and Tran.

“They’ve impressed me with their knowledge and motivation during the two short weeks that they've been in my classes this semester,” said McAlister. “It is my understanding that they have surpassed the learning objectives required by their employer in their apprenticeship program and are attending HFC to further enhance their knowledge in a very challenging career path. That exemplifies a level of commitment to excellence that will help take them to the far-reaching corners of the electrical industry, as well as life itself.”