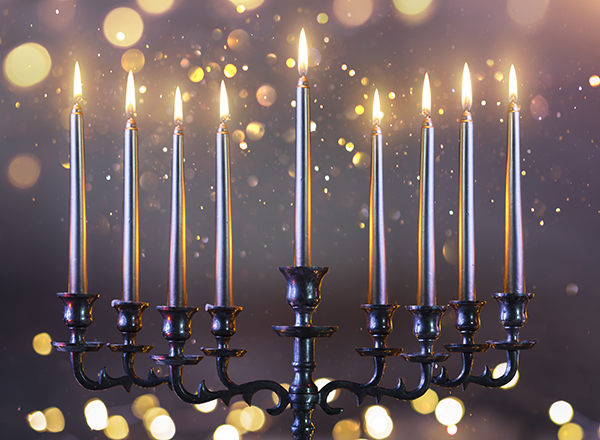 Starting Thursday, Dec. 10, and concluding Friday, Dec. 31, many people worldwide will celebrate the Jewish holiday of Hanukkah (sometimes spelled Chanukah). The holiday is widely known as the Festival of Lights.

The Hebrew word Chanukah means “dedication,” and this holiday commemorates the rededication of the Holy Temple in Jerusalem.

In 164 BC, a band of Jewish fighters called Maccabees, under the command of a man named Judah, defeated the Greek (Seleucid) army that had captured the city of Jerusalem in 200 BC. Judah and his compatriots reclaimed the Holy Temple in Jerusalem and sought to re-light its menorah (an oil-based candelabrum). They found only enough purified oil to keep the menorah lit for one day. However, the oil kept the menorah alight for 8 days, after which ritually purified oil was available.

I wrote in more detail about this holiday last year, and I encourage you to read it.

A centerpiece of Hanukkah is the lighting of the menorah. It contains eight candles, plus a central slot for the shamash (“servant”), which is used to light the other eight candles. One candle is lit each night, so all eight are burning on the final night. Families will often gather and recite traditional blessings or sing songs as they light the menorah.

Another venerated tradition is a game children often play with a dreidel, a four-sided spinner that contains letters of the Hebrew alphabet.

Many holidays take place at or near the end of the calendar year. Nearly all are festive and communal, bringing people together in groups to celebrate. This year, these holidays will be celebrated differently, because it is not possible to gather safely in multi-household groups.

The holidays remain a source of light and joy in our lives, and I encourage all in our community, no matter the cultural or religious tradition, to seek ways to safely create a sense of community and togetherness. I know many families and friends have used technology to do this at previous holidays. I encourage you to consider this. For example, you may wish to host a personal Zoom meeting with your loved ones.

However you celebrate, I wish you a safe, healthy, and joyous holiday season.