Get Out the Vote event brings young voters, officials together 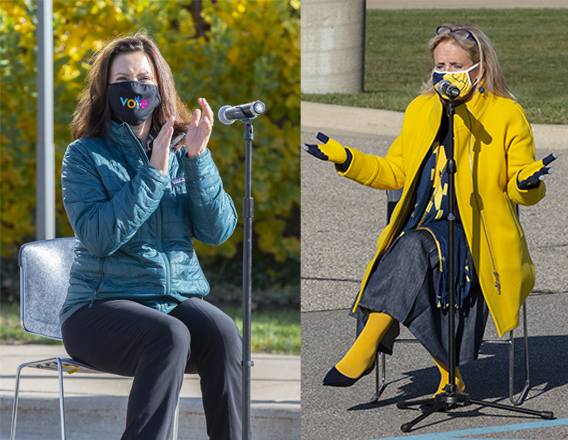 A group of about 50 people gathered on the main Henry Ford College campus Saturday, October 31, for an outdoor rally to get out the vote, hosted by HFC President Russ Kavalhuna. Governor Gretchen Whitmer, U.S. Representative Debbie Dingell, Wayne County Commissioner Sam Baydoun, and MSU Trustee Brian Mosallam headlined the event. The crowd was intentionally small, and each person wore a mask and used social distancing to stay safe. Still, it was a spirited event with active discussion.

All four officials spoke briefly and encouraged the crowd of predominantly young people to vote and to encourage others to vote. Many of the participants are first-time voters this year.

This year’s presidential race is predicted to be very close in Michigan. “Every one of us has a personal stake in the outcome of this election,” said Whitmer. “The state of Michigan is going to play a large role in determining our nation’s fate.”

After speaking, Whitmer and Dingell took questions from the audience. Questions came up about women in politics, political divisions, access to education, the environment, and more.

Whitmer talked about leadership from young people and the difference they will make in the future of the country. She encouraged the crowd, and especially young women, to step forward and make their voices heard, and to know that others will have their backs. She talked about some of the challenges of leadership in the past eight months, and having to make decisions to support public safety that are sometimes politically unpopular. “I think doing the right thing is always good policy,” she said.

Representative Dingell appealed for a return to civility where divisions have become deep.

“It is up to all of us,” said Dingell, “to lower the temperature. There is so much vitriol, rancor, animosity, and bullying right now, and this has to stop. We are responsible for changing the tone. We have to respect each other, and listen to each other. We have to really hear others. We can learn to disagree, agreeably.”

“We are all on this ballot,” concluded Whitmer, speaking about the personal importance of voting for all Michigan citizens. “Let’s set audacious goals and take advantage of the incredible opportunities in our state to lead the nation.”