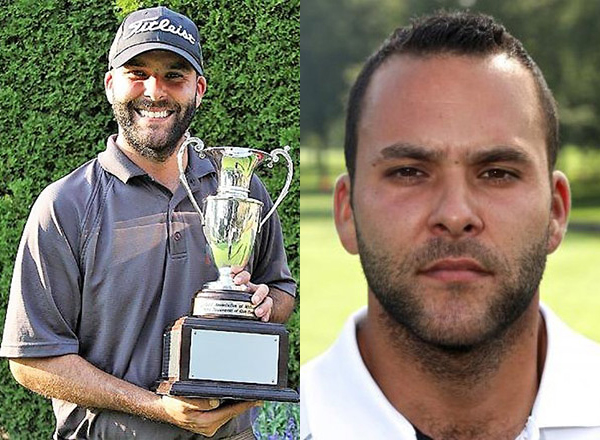 It was HFC alumnus Jake Kieronski’s goal to coach golf at the college level.

And he’s achieved his dream at his alma mater, where he won the Michigan Community College Athletic Association (MCCAA) Individual Championship title for two consecutive years.

“Golf has been so great to me, and now I have the opportunity to give back to my alma mater. Coaching at this level and being an alumnus is the best case scenario I could have drawn up,” said Kieronski, an independent insurance agent for the KSP Agency in Wyandotte, where he lives with his wife and son.

A graduate of Roosevelt High School in Wyandotte, Kieronski attended HFC on a golf scholarship, earning his associate degree in business administration in 2016. He also has an associate degree in sports management from the College of Golf at Keiser University in Port St. Lucie, Fla.

Kieronski has coached golf for 11 years – the last two at Summit Academy North High School in Romulus. At HFC, he replaces Coach Trevor Monaco, a fellow alumnus and former teammate. In fact, Monaco recommended Kieronski to HFC Athletic Director Rochelle Taylor to be his successor.

"Jake is a great addition to our coaching staff,” said Taylor. “He knows what it takes to succeed at this level, and I have no doubt he will be able to translate that to our players. I'm excited to have him on board and to expand on the program left by Coach Monaco.”

Meeting the challenges of coaching

Kieronski explained the differences between coaching golf at the high school level and at the college level.

“To me, it’s the maturity of the individual. From motivation to individuality, the college level will bring out more defined skill sets, which I cannot wait to cultivate,” said Kieronski. “Trevor leaves the program in good shape. Knowing Trevor, I hope to be just as effective a coach as he is.”

He’s looking forward to meeting the challenges of being a new coach, including the recent postponement of all fall sports due to the pandemic.

“My first year will have its challenges for sure, but the team here at HFC is beyond supportive,” he said. “The postponement of the season is not an issue for me. The health and safety of the students and staff come first.”

Bringing a “homegrown mentality” to the team

Kieronski began playing golf at 10 with his father, who took him to the golf range. It was there Kieronski fell in love with the sport. The main reason he started playing was that his dad couldn’t believe that all of his “uncoordinated” friends were beating him in what he believed was an easy game.

“So my dad needed to practice, and he brought me along,” said Kieronski, laughing. “I will forever be in his debt.”

Kieronski hopes to build a great program over the next several years.

“As an alumnus, I hope to bring a homegrown mentality to the team. I’ve studied here, played here, and have been on the biggest stage here. With that, it brings a great sense of familiarity and comfort for my players,” he said. “The best part of coaching golf is giving someone the opportunity to play a game that is so rewarding. When it’s all said and done and I'm 90 years old, I will have enjoyed the fruits of this game for almost 80 years and – hopefully – will help others do the same.”