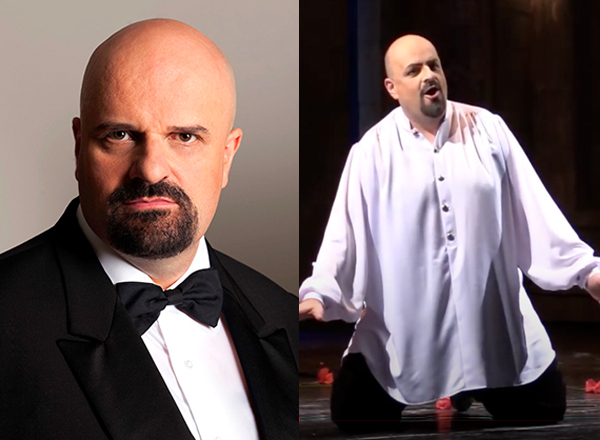 Sebastian Catana, who was dual enrolled at HFC in 1990-91, is an opera singer. He has performed at the New York Metropolitan Opera and abroad.

Sebastian Catana, who was a dual-enrolled student at HFC while attending Dearborn High School (DHS), followed in his parents’ footsteps to become an opera singer. But it wasn't a singular path.

Catana’s parents – his mother, Emilia, of Dearborn Heights, and his late father, Vasile – were both renowned opera singers in Romania, where Catana was born. In 1990, Catana, an only child, and his mother came to the United States, escaping the iron-fisted rule of dictator Nicolae Ceausescu. They settled in Dearborn to begin a new life.

An aptitude for math

At DHS, Catana met math teacher Gordon Bremenkampf, who also taught at HFC from 1974-2008. Bremenkampf was impressed by Catana’s proficiency in mathematics. He arranged for Catana to enroll at HFC, where Catana took Calculus I with Henry Navarro and Calculus II with Andrea Seavitt as a high school senior.

“I liked the College. It was my first foray into higher education in the United States. I really enjoyed the teachers; I thought they were excellent. It’s been almost 30 years since I’ve been back,” recalled Catana, who lives in Pittsburgh with Melanie, his wife of 15 years. Together, they have two kids: Maria, 12, and Max, 8.

Catana scored 780 out of 800 on the math portion of the Standardized Aptitude Test (SAT), the 98th percentile. On a Saturday in 1991, Bremenkampf took him to the Office of Admissions at the University of Michigan in Ann Arbor. There wasn’t any way to get Catana’s school records from Romania because of the political climate at the time. U-M officials applied the criteria for foreign applicants to Catana, rather than the criteria used for American students.

Catana was accepted at U-M under two conditions:

Neither condition posed a problem.

Catana found that HFC prepared him “absolutely" for his more advanced studies, "especially since I pursued engineering at U-M. I went directly into Calculus III. I had a very good education at HFC.”

Alongside his aptitude for engineering, Catana retained a passion for opera. His parents had taken him to his first opera when he was 4.

“He was so impressed. I think since that moment, in his mind, he wanted to be an opera singer,” said his mother, who teaches private voice lessons.

He excelled in voice performance, and learned a great deal in a short period. Then, the moment of decision arrived. Catana – a baritone – had to choose between a career in opera and a career in engineering.

He chose his passion, opera. And he was all in.

In 2001, Catana made his professional debut, singing in Les Huguentos at Carnegie Hall in New York City. This was a turning point for Catana, who found himself with many offers for work afterward. He appeared in several roles with the Baltimore Opera Company for the 2001-02 season and with the Seattle Opera for the 2002-03 season.

These engagements were with Baltimore Opera Young Artist Program and Seattle Opera Young Artist Program, both of which were training programs for opera singers created as part of the Baltimore Opera and Seattle Opera, in which young performers are accepted to perfect their craft and skills while receiving a monthly stipend. From there, Catana performed in a special concert with the National Symphony Orchestra in Mexico.

In 2003, Catana made his debut at the Met, the New York Metropolitan Opera, one of the most prestigious operatic venues in the world – as Schaunard in La Boheme. Attending his Met debut were his mother, Bremenkampf, Pinza, and John L. Anderson, former dean of the College of Engineering at Carnegie Mellon.

“I was fortunate to have a seat in the director’s box,” said Bremenkampf. “One of my greatest joys was to travel to New York City to see Sebastian sing the role of Schaunard in La Boheme at the New York Metropolitan Opera. I can't quite describe what it was like to see him come on stage and fill that 4,000-seat auditorium with his beautiful voice.”

Bremenkampf admitted he was disappointed, at first, that Catana was foregoing a promising career in engineering, especially with his command of mathematics and physics.

“I initially thought he was making a mistake by giving up a career in engineering for one in opera,” he said. “That was one of many examples in my life where I was wrong, as evidenced by his tremendous success on the stage.”

Catana spent nearly five years at the Met. Some of his roles included Fiorello in Il Barbiere di Siviglia, Marullo in Rigoletto, Morales in Carmen, and Valentin in Faust.

For the last 10 years, Catana has toured opera houses throughout Europe, including Italy, Germany, France, and Israel.

Catana rehearses at least 6-8 hours daily. There are three parts to putting together an opera:

Opera singers sometimes have private lessons with a voice coach.

“That’s how an opera is made. The first two parts tend to be separate at the beginning – you work with the conductor for several days, then you work with the director. Eventually, all the aspects come together.”

“I think they’re very well-written,” he said. “The music is beautiful. He combines the words, the music, and the feeling very well. It’s very easy to feel what the character is thinking and singing about. Rigoletto, which I’ve performed in, is one of my favorites.”

Catana was supposed to play Alfio and Tonio in the double-bill operas Cavalleria Rusticana and Pagliacci in Verona, Italy this summer and in Genoa, Italy this fall. The pandemic took that out of his hands. It is unclear when the venues will reopen.

“Tonio is one of the biggest parts in Pagliacci. It’s one of the greatest roles in baritone repertoire. It’s a role you can only do in maturity, not a role you can do when you’re very young, because it’s a difficult part to sing, it’s a difficult part to act. It takes a lot out of you. If you do it too early, you might harm your voice,” he explained.

“Much more passionate about what I do now”

“I remember being in Japan three years ago. It was an unforgettable trip,” he recalled fondly. “Performing in Japan was very nice. The people there were so welcoming. They greeted you every night after the performance, asking for autographs. It’s a lot of work, but that’s one of the great benefits of being an opera singer.”

While Catana is able to help his two kids with their math and science homework, he doesn’t miss being an engineer, nor does he regret leaving that career for opera.

“I always enjoyed the intellectual challenge of engineering, and I appreciate the education I received. But I’m much more passionate about what I do now,” he said. “I love what I do now.”

A three-minute excerpt from Catana's performance of Verdi's Macbeth.