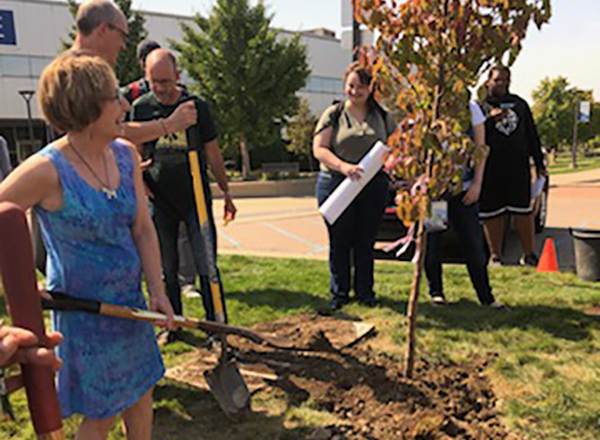 Linda Brandt, left, and colleagues planted a tree during last September's Climate Forum. This year's Earth Day activities have been postponed, but will take place when it is safe to hold them.

Earth Day is an international education and conservation day focused on preserving clean air, water, land, and other natural resources.

For decades leading up to the 1970s, industrial growth spread with very few restrictions on its environmental impact. Problems such as air pollution, water pollution, litter, and damage to habitats and sensitive landscapes were becoming increasingly evident and attributable to factories, mining, drilling, pesticides, and other practices.

U.S. Senator Gaylord Nelson of Wisconsin proposed a national “teach-in” and grassroots movement to support environmental conservation. He announced the idea in the fall of 1969. By the spring of 1970, he had appointed Denis Haynes, a student activist, to help organize a national event and movement. Haynes mobilized volunteers and staff members across the country. On April 22, 1970, the first Earth Day took place in the United States.

On that first Earth Day, an estimated 20 million Americans joined rallies, marches, cleanups, performances, and other activities in major cities nationwide. Thousands of schools and colleges joined the effort. The participation of 10% of America’s population helped create a groundswell of public and legislative action. In December of that year, the Environmental Protection Agency (EPA) was established, which created national standards and enforcement for the three-year-old Clean Air Act. In 1972, Congressed passed the Clean Water Act, and in 1973, Congress passed the Endangered Species Act. Many other laws followed.

In the subsequent decades, popular movements took place addressing litter and trash removal, recycling, pollution reduction, and energy conservation. By 1990, Earth Day was a global celebration. By some accounts, Earth Day is now the largest non-religious observance in the world, mobilizing more than one billion people to take action and participate in events.

Earth Day has importance today because the coronavirus attacks people’s lungs, and air pollution exacerbates its effects. But due to deep reductions in automotive traffic and other kinds of activity, worldwide reports are showing cleaner air and fewer human impacts on the environment across the globe.

Each year’s Earth Day has an international theme. The 2020 theme is “climate action.” An HFC group led by Linda Brandt, Zac Polzin, Gary McIlroy, and others had planned a broad group of events for “Earth Day Week” on our campuses this week. Unfortunately, the closure of our campuses due to COVID-19 postponed those events. Linda Brandt tells us that events will take place in the fall, as soon as it is safe to proceed. Planned tree plantings will take place as soon as possible.

Arbor Day was founded in 1872 by a man from Detroit named Julius Sterling Morton. He and his family moved to Nebraska and planted trees, shrubs, and flowers on the prairie around them. Morton, a journalist, had many friends who came from places that had more trees than Nebraska, and they missed being surrounded by trees. Morton used his writing and speaking opportunities to advocate for environmental stewardship. He approached the Nebraska State Board of Agriculture with a resolution to designate an annual day to plant trees statewide. It was adopted, and April 10, 1872 was designated the first Arbor Day.

Word spread quickly. Counties and individuals competed for prizes, and more than 1 million trees were planted that day. Other states soon followed Nebraska’s lead, and by 1920, 45 states had their own Arbor Day observance.

The holiday was adopted by nearly every state until, on the holiday’s 100th anniversary in 1972, President Richard Nixon proclaimed National Arbor Day on the final Friday each April. Dozens of other countries also celebrate tree-planting festivals throughout the year. The planting of trees is an act of generosity to future generations, who will benefit from the trees’ shade, beauty, natural habitats, and renewable resources.

Earth Day and Arbor Day are worthy of commemoration, even during a global pandemic. While we are staying home to stay safe, we can still safely enjoy going outdoors and reveling in the natural environment. Enjoy the fresh air!