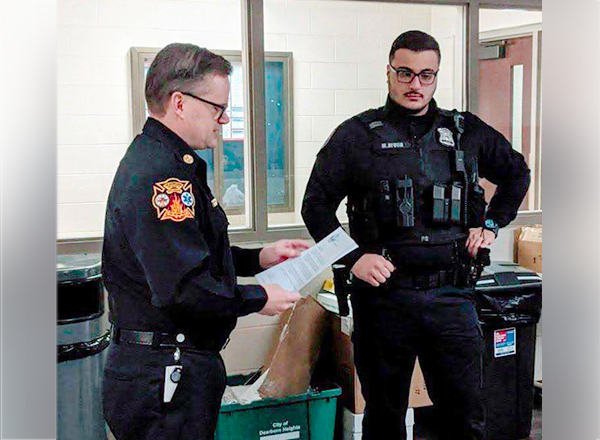 Police officer Mehdi Ayoub of the Dearborn Heights Police Department, an HFC alumnus, was honored at the beginning of February for saving the life of a 1-year-old boy.

Chief David Brogan of the Dearborn Heights Fire Department formally thanked Ayoub during roll call at the DHPD, delivering a letter of commendation. The story was chronicled in The Arab American News and the Dearborn Press & Guide.

“Officer Ayoub taking immediate steps that day and performing (CPR) on this child was crucial to (the child's) survival. Each member of the crew asked that our brothers and sisters at the DHPD be acknowledged for their roles in the successful outcome of this incident,” said Brogan. “Officer Ayoub represents the exceptional men and women who are first responders in city of Dearborn Heights. He has the gratitude of a relieved family, my department, and – I’m certain – a grateful community.”

First on the scene

On Sept. 7, 2019, Ayoub was on patrol, heading southbound on Beech Daly at Annapolis. Dispatch informed all units to head for an address at Powers, three blocks south of where Ayoub was at that moment. A toddler was unconscious and not breathing after falling into a koi pond. Ayoub was the first on the scene.

“I grabbed my breathing mask, which I carry in my bag. I saw a large crowd gathered in the yard, screaming and yelling. Everybody was frantic. The boy's mother held him in her arms – ‘Please save my child!’” recalled Ayoub, who earned his associate degree in criminal justice from HFC in 2018 and was hired as a police officer with DHPD.

“My adrenaline was pumping the entire time,” said Ayoub. “A minute into giving him compressions, the kid started coughing, which I knew was a good sign. I continued until EMS arrived. The child started moving again, coming in and out of consciousness.”

EMS transported the toddler to Children’s Hospital of Michigan – with Ayoub providing a police escort – where the hospital staff awaited their arrival. The following day, Ayoub followed up and spoke to the doctor. At that point, the toddler was on a ventilator. Today, the toddler is doing fine, according to Ayoub.

“The doctor told me that by giving him CPR, I probably saved his life,” said Ayoub. “Honestly, I was like, ‘Wow!’ I felt like I accomplished something and made such a difference. The kid’s parents couldn’t thank me enough. I was proud of myself. All in all, it was very rewarding.”

Police Chief Michael Petri said, “The actions of Officer Ayoub are representative of the longstanding tradition of cooperation and service to the public that is shared by the Dearborn Heights police and fire departments.”