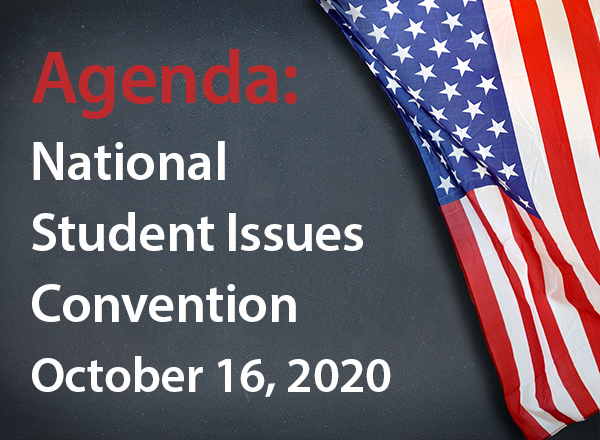 The National Student Issues Virtual Convention – for which HFC will serve as one of the two coordinating institutions – will be accessible nationally via Zoom on Friday, Oct. 16, from 1:00 to 4:00 p.m. EST (noon to 3:00 p.m. CST). More than 250 students representing 15 colleges and universities from across eight states will participate.

The agenda for the National Student Issues Virtual Conference is as follows:
• 1:00 p.m. EST (noon CDT): The convention is called to order, followed by introduction and orientation.
• 1:10 p.m. EST (12:10 p.m. CDT): Students will break into small groups, meeting in separate Zoom rooms. There, they will elect a student chairperson and recorder for each group. At that point, each group will select three issues to bring to the General Assembly.
• 2:00 p.m. EST (1:00 p.m. CDT): At the General Assembly, the three issues selected by each group will be posted on a Zoom Whiteboard. Each group will be able to comment on its reasons for choosing these particular issues. At that point, the floor will be opened for discussion about any of the issues.
• 2:50 p.m. EST (1:50 p.m. CDT): All participating students will vote electronically on what they consider the most important issues. The Top 5 issues will be announced and presented to the invited public officials and candidates.
• 3:00 p.m. EST (2:00 p.m. CDT): Public officials, candidates, and representatives from both major political parties will have an opportunity to respond to the five issues selected by the students.
• 4:00 p.m. EST (3:00 p.m. CDT): Convention adjourns.

“The youth vote is likely to have a significant impact on the outcome of many races in 2020,” said Dr. Anthony D. Perry, HFC political science professor and convention coordinator.

For questions or more information, contact Perry at adperry1@hfcc.edu.